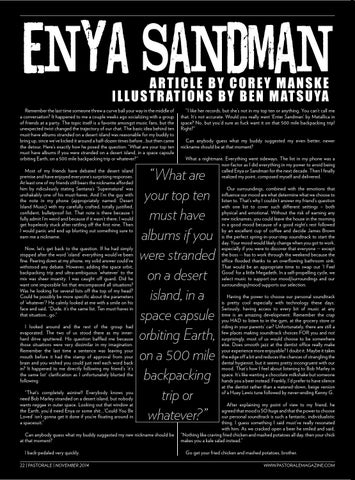 Remember the last time someone threw a curve ball your way in the middle of a conversation? It happened to me a couple weeks ago socializing with a group of friends at a party. The topic itself is a favorite amongst music fans, but the unexpected twist changed the trajectory of our chat. The basic idea behind ten must-have albums stranded on a desert island was reasonable for my buddy to bring up, since we’ve kicked it around a half-dozen times before…but then came the detour. Here’s exactly how he posed the question: “What are your top ten must have albums if you were stranded on a desert island, in a space capsule orbiting Earth, on a 500 mile backpacking trip or whatever?” Most of my friends have debated the desert island premise and have enjoyed everyone’s surprising responses. At least one of my friends still bears the nickname afforded him by ridiculously stating Santana’s ‘Supernatural’ was unshakably one of his must-haves. And I’m the guy with the note in my phone (appropriately named: Desert Island Music) with my carefully crafted, totally justified, confident, bulletproof list. That note is there because I fully admit I’m weird and because if it wasn’t there, I would get hopelessly stuck after rattling off the first nine. Then I would panic and end up blurting out something sure to earn me a nickname. Now, let’s get back to the question. If he had simply stopped after the word ‘island’ everything would’ve been fine. Peering down at my phone, my solid answer could’ve withstood any debate. However, adding the space orbit, backpacking trip and ultra-ambiguous ‘whatever’ to the mix was sheer insanity. I was caught off guard. Did he want one impossible list that encompassed all situations? Was he looking for several lists off the top of my head? Could he possibly be more specific about the parameters of ‘whatever’? He calmly looked at me with a smile on his face and said, “Dude, it’s the same list. Ten must-haves in that situation…go.” I looked around and the rest of the group had evaporated. The two of us stood there as my innerhard drive sputtered. His question baffled me because those situations were very dissimilar in my imagination. Remember the last time a sentence was leaving your mouth before it had the stamp of approval from your brain and you wished you could just reel each word back in? It happened to me directly following my friend’s ‘it’s the same list’ clarification as I unfortunately blurted the following: “That’s completely asinine!! Everybody knows you need Bob Marley stranded on a desert island, but nobody wants reggae in outer space. Looking out that window at the Earth, you’d need Enya or some shit…’Could You Be Loved’ isn’t gonna get it done if you’re floating around in a spacesuit.”

Can anybody guess what my buddy suggested my even better, newer nickname should be at that moment? What a nightmare. Everything went sideways. The list in my phone was a non-factor as I did everything in my power to avoid being called Enya or Sandman for the next decade. Then I finally realized my point, composed myself and delivered.

“What are your top ten must have albums if you were stranded on a desert island, in a space capsule orbiting Earth, on a 500 mile backpacking trip or whatever?”

Can anybody guess what my buddy suggested my new nickname should be at that moment? I back-pedaled very quickly.

“I like her records, but she’s not in my top ten or anything. You can’t call me that. It’s not accurate. Would you really want ‘Enter Sandman’ by Metallica in space? No, but you’d sure as fuck want it on that 500 mile backpacking trip! Right?”

Our surroundings, combined with the emotions that influence our mood are what determine what we choose to listen to. That’s why I couldn’t answer my friend’s question with one list to cover such different settings – both physical and emotional. Without the risk of earning any new nicknames, you could leave the house in the morning in a good mood because of a good night’s rest followed by an excellent cup of coffee and decide James Brown is the perfect spring-in-your-step soundtrack to start the day. Your mood would likely change when you got to work, especially if you were to discover that everyone -- except the boss -- has to work through the weekend because the office flooded thanks to an overflowing bathroom sink. That would be an appropriate time to swap out ‘I Feel Good’ for a little Megadeth. In a self-propelling cycle, we select music to support our mood/surroundings and our surroundings/mood supports our selection. Having the power to choose our personal soundtrack is pretty cool especially with technology these days. Seriously, having access to every bit of music at any time is an amazing development. Remember the crap you HAD to listen to in the gym, at the grocery store or riding in your parents’ car? Unfortunately, there are still a few places making soundtrack choices FOR you and not surprisingly, most of us would choose to be somewhere else. Does smooth jazz at the dentist office really make your experience more enjoyable? I doubt it. Maybe it takes the edge off a bit and reduces the chances of strangling the dental hygienist, but it seems pretty incongruent with our mood. That’s how I feel about listening to Bob Marley in space. It’s like wanting a chocolate milkshake but someone hands you a beer instead. Frankly, I’d prefer to have silence at the dentist rather than a watered-down, beige version of a Huey Lewis tune followed by never-ending Kenny G.

After explaining my point of view to my friend, he agreed that mood is SO huge and that the power to choose our personal soundtrack is such a fantastic, individualistic thing. I guess something I said must’ve really resonated with him. As we cracked open a beer he smiled and said, “Nothing like craving fried chicken and mashed potatoes all day, then your chick makes you a kale salad instead.” Go get your fried chicken and mashed potatoes, brother. WWW.PASTORALEMAGAZINE.COM 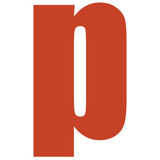