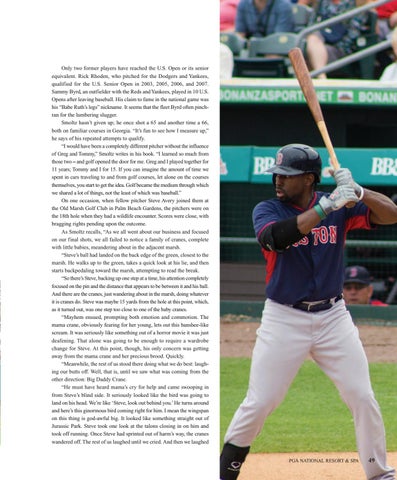 Only two former players have reached the U.S. Open or its senior equivalent. Rick Rhoden, who pitched for the Dodgers and Yankees, qualified for the U.S. Senior Open in 2003, 2005, 2006, and 2007. Sammy Byrd, an outfielder with the Reds and Yankees, played in 10 U.S. Opens after leaving baseball. His claim to fame in the national game was his “Babe Ruth’s legs” nickname. It seems that the fleet Byrd often pinchran for the lumbering slugger. Smoltz hasn’t given up; he once shot a 65 and another time a 66, both on familiar courses in Georgia. “It’s fun to see how I measure up,” he says of his repeated attempts to qualify. “I would have been a completely different pitcher without the influence of Greg and Tommy,” Smoltz writes in his book. “I learned so much from those two – and golf opened the door for me. Greg and I played together for 11 years; Tommy and I for 15. If you can imagine the amount of time we spent in cars traveling to and from golf courses, let alone on the courses themselves, you start to get the idea. Golf became the medium through which we shared a lot of things, not the least of which was baseball.” On one occasion, when fellow pitcher Steve Avery joined them at the Old Marsh Golf Club in Palm Beach Gardens, the pitchers were on the 18th hole when they had a wildlife encounter. Scores were close, with bragging rights pending upon the outcome. As Smoltz recalls, “As we all went about our business and focused on our final shots, we all failed to notice a family of cranes, complete with little babies, meandering about in the adjacent marsh. “Steve’s ball had landed on the back edge of the green, closest to the marsh. He walks up to the green, takes a quick look at his lie, and then starts backpedaling toward the marsh, attempting to read the break. “So there’s Steve, backing up one step at a time, his attention completely focused on the pin and the distance that appears to be between it and his ball. And there are the cranes, just wandering about in the marsh, doing whatever it is cranes do. Steve was maybe 15 yards from the hole at this point, which, as it turned out, was one step too close to one of the baby cranes. “Mayhem ensued, prompting both emotion and commotion. The mama crane, obviously fearing for her young, lets out this banshee-like scream. It was seriously like something out of a horror movie it was just deafening. That alone was going to be enough to require a wardrobe change for Steve. At this point, though, his only concern was getting away from the mama crane and her precious brood. Quickly. “Meanwhile, the rest of us stood there doing what we do best: laughing our butts off. Well, that is, until we saw what was coming from the other direction: Big Daddy Crane. “He must have heard mama’s cry for help and came swooping in from Steve’s blind side. It seriously looked like the bird was going to land on his head. We’re like ‘Steve, look out behind you.’ He turns around and here’s this ginormous bird coming right for him. I mean the wingspan on this thing is god-awful big. It looked like something straight out of Jurassic Park. Steve took one look at the talons closing in on him and took off running. Once Steve had sprinted out of harm’s way, the cranes wandered off. The rest of us laughed until we cried. And then we laughed PGA NATIONAL RESORT & SPA