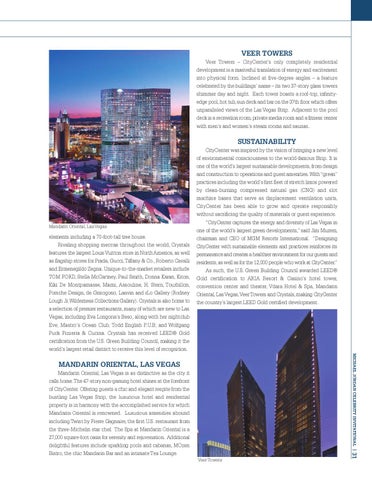 VEER TOWERS Veer Towers – CityCenter’s only completely residential development is a masterful translation of energy and excitement into physical form. Inclined at five-degree angles – a feature celebrated by the buildings’ name – its two 37-story glass towers shimmer day and night. Each tower boasts a roof-top, infinityedge pool, hot tub, sun deck and bar on the 37th floor which offers unparalleled views of the Las Vegas Strip. Adjacent to the pool deck is a recreation room, private media room and a fitness center with men’s and women’s steam rooms and saunas.

SUSTAINABILITY CityCenter was inspired by the vision of bringing a new level of environmental consciousness to the world-famous Strip. It is one of the world’s largest sustainable developments, from design and construction to operations and guest amenities. With “green” practices including the world’s first fleet of stretch limos powered by clean-burning compressed natural gas (CNG) and slot machine bases that serve as displacement ventilation units, CityCenter has been able to grow and operate responsibly without sacrificing the quality of materials or guest experience. Mandarin Oriental, Las Vegas

elements including a 70-foot-tall tree house.

“CityCenter captures the energy and diversity of Las Vegas in one of the world’s largest green developments,” said Jim Murren, chairman and CEO of MGM Resorts International. “Designing

CityCenter with sustainable elements and practices reinforces its

permanence and creates a healthier environment for our guests and

residents, as well as for the 12,000 people who work at CityCenter.”

and Ermenegildo Zegna. Unique-to-the-market retailers include

As such, the U.S. Green Building Council awarded LEED®

a selection of premier restaurants, many of which are new to Las Vegas, including Eva Longoria’s Beso, along with her nightclub Eve; Mastro’s Ocean Club; Todd English P.U.B; and Wolfgang Puck Pizzeria & Cucina. Crystals has received LEED® Gold certification from the U.S. Green Building Council, making it the world’s largest retail district to receive this level of recognition. MICHAEL JORDAN CELEBRITY INVITATIONAL

MANDARIN ORIENTAL, LAS VEGAS Mandarin Oriental, Las Vegas is as distinctive as the city it calls home. The 47-story non-gaming hotel shines at the forefront of CityCenter. Offering guests a chic and elegant respite from the bustling Las Vegas Strip, the luxurious hotel and residential property is in harmony with the accomplished service for which Mandarin Oriental is renowned. Luxurious amenities abound including Twist by Pierre Gagnaire, the first U.S. restaurant from the three-Michelin star chef. The Spa at Mandarin Oriental is a 27,000 square-foot oasis for serenity and rejuvenation. Additional delightful features include sparkling pools and cabanas, MOzen Veer Towers

Bistro, the chic Mandarin Bar and an intimate Tea Lounge.