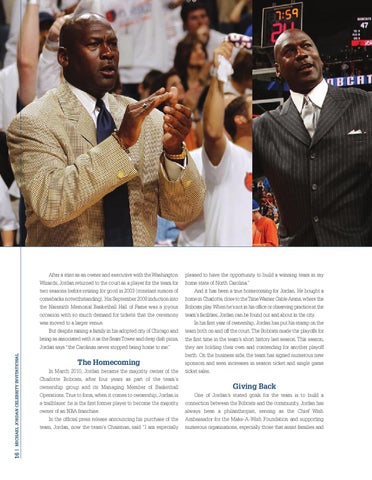 After a stint as an owner and executive with the Washington Wizards, Jordan returned to the court as a player for the team for

two seasons before retiring for good in 2003 (constant rumors of

And it has been a true homecoming for Jordan. He bought a

comebacks notwithstanding). His September 2009 induction into

home in Charlotte, close to the Time Warner Cable Arena, where the

the Naismith Memorial Basketball Hall of Fame was a joyous

Bobcats play. When he’s not in his office or observing practice at the

occasion with so much demand for tickets that the ceremony

team’s facilities, Jordan can be found out and about in the city.

was moved to a larger venue.

In his first year of ownership, Jordan has put his stamp on the

team both on and off the court. The Bobcats made the playoffs for

being as associated with it as the Sears Tower and deep dish pizza,

the first time in the team’s short history last season. This season,

Jordan says “the Carolinas never stopped being home to me.”

they are holding their own and contending for another playoff berth. On the business side, the team has signed numerous new

The Homecoming In March 2010, Jordan became the majority owner of the

Charlotte Bobcats, after four years as part of the team’s ownership group and its Managing Member of Basketball

Operations. True to form, when it comes to ownership, Jordan is

a trailblazer: he is the first former player to become the majority

connection between the Bobcats and the community. Jordan has

owner of an NBA franchise.

always been a philanthropist, serving as the Chief Wish

In the official press release announcing his purchase of the

Ambassador for the Make-A-Wish Foundation and supporting

team, Jordan, now the team’s Chairman, said “I am especially

numerous organizations, especially those that assist families and