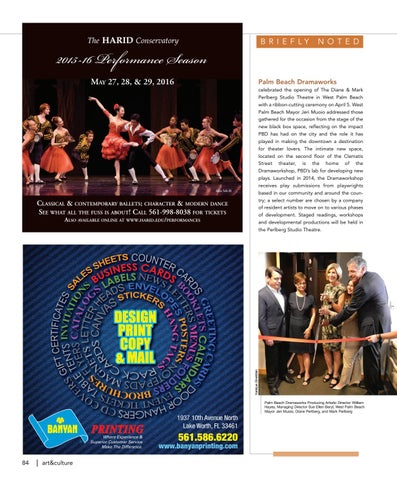 Palm Beach Dramaworks celebrated the opening of The Diane &amp; Mark Perlberg Studio Theatre in West Palm Beach with a ribbon-cutting ceremony on April 5. West Palm Beach Mayor Jeri Muoio addressed those gathered for the occasion from the stage of the new black box space, reflecting on the impact PBD has had on the city and the role it has played in making the downtown a destination for theater lovers. The intimate new space, located on the second floor of the Clematis Street theater, is the home of the Dramaworkshop, PBD’s lab for developing new plays. Launched in 2014, the Dramaworkshop receives play submissions from playwrights based in our community and around the country; a select number are chosen by a company of resident artists to move on to various phases of development. Staged readings, workshops and developmental productions will be held in the Perlberg Studio Theatre.

CLASSICAL &amp; CONTEMPORARY BALLETS; CHARACTER &amp; MODERN DANCE SEE WHAT ALL THE FUSS IS ABOUT! CALL 561-998-8038 FOR TICKETS