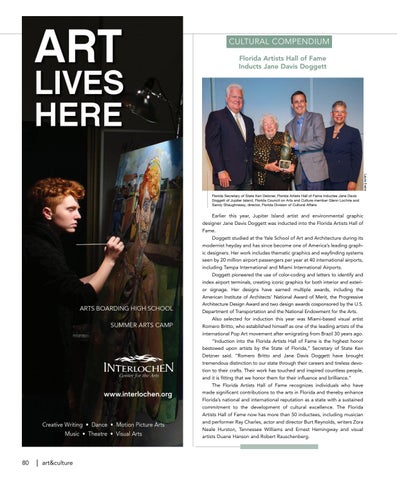 Earlier this year, Jupiter Island artist and environmental graphic designer Jane Davis Doggett was inducted into the Florida Artists Hall of Fame. Doggett studied at the Yale School of Art and Architecture during its modernist heyday and has since become one of America’s leading graphic designers. Her work includes thematic graphics and wayfinding systems seen by 20 million airport passengers per year at 40 international airports, including Tampa International and Miami International Airports. Doggett pioneered the use of color-coding and letters to identify and index airport terminals, creating iconic graphics for both interior and exterior signage. Her designs have earned multiple awards, including the American Institute of Architects’ N ational Award of Merit, the Progressive Architecture Design Award and two design awards cosponsored by the U.S. Department of Transportation and the National Endowment for the Arts. Also selected for induction this year was Miami-based visual artist Romero Britto, who established himself as one of the leading artists of the international Pop Art movement after emigrating from Brazil 30 years ago. “Induction into the Florida Artists Hall of Fame is the highest honor bestowed upon artists by the State of Florida,” Secretary of State Ken Detzner said. “Romero Britto and Jane Davis Doggett have brought tremendous distinction to our state through their careers and tireless devotion to their crafts. Their work has touched and inspired countless people, and it is fitting that we honor them for their influence and brilliance.” The Florida Artists Hall of Fame recognizes individuals who have made significant contributions to the arts in Florida and thereby enhance Florida’s national and international reputation as a state with a sustained commitment to the development of cultural excellence. The Florida Artists Hall of Fame now has more than 50 inductees, including musician and performer Ray Charles, actor and director Burt Reynolds, writers Zora N eale Hurston, Tennessee Williams and Ernest Hemingway and visual artists Duane Hanson and Robert Rauschenberg.