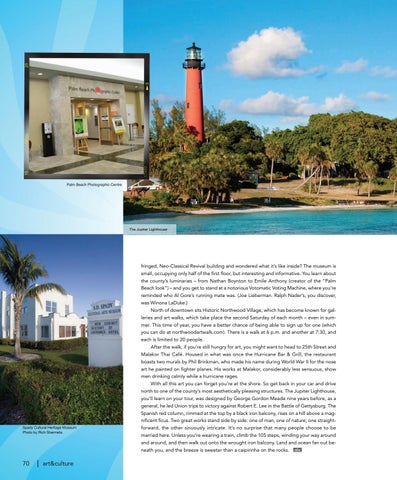 fringed, Neo-Classical Revival building and wondered what it’s like inside? The museum is small, occupying only half of the first floor, but interesting and informative. You learn about the county’s luminaries – from Nathan Boynton to Emile Anthony (creator of the “Palm Beach look”) – and you get to stand at a notorious Votomatic Voting Machine, where you’re reminded who Al Gore’s running mate was. (Joe Lieberman. Ralph Nader’s, you discover, was Winona LaDuke.) North of downtown sits Historic Northwood Village, which has become known for galleries and art walks, which take place the second Saturday of each month – even in summer. This time of year, you have a better chance of being able to sign up for one (which you can do at northwoodartwalk.com). There is a walk at 6 p.m. and another at 7:30, and each is limited to 20 people. After the walk, if you’re still hungry for art, you might want to head to 25th Street and Malakor Thai Café. Housed in what was once the Hurricane Bar &amp; Grill, the restaurant boasts two murals by Phil Brinkman, who made his name during World War II for the nose art he painted on fighter planes. His works at Malakor, considerably less sensuous, show men drinking calmly while a hurricane rages. With all this art you can forget you’re at the shore. So get back in your car and drive north to one of the county’s most aesthetically pleasing structures. The Jupiter Lighthouse, you’ll learn on your tour, was designed by George Gordon Meade nine years before, as a general, he led Union trips to victory against Robert E. Lee in the Battle of Gettysburg. The Spanish red column, rimmed at the top by a black iron balcony, rises on a hill above a magnificent ficus. Two great works stand side by side: one of man, one of nature; one straightforward, the other sinuously intricate. It’s no surprise that many people choose to be married here. Unless you’re wearing a train, climb the 105 steps, winding your way around and around, and then walk out onto the wrought iron balcony. Land and ocean fan out beneath you, and the breeze is sweeter than a caipirinha on the rocks.