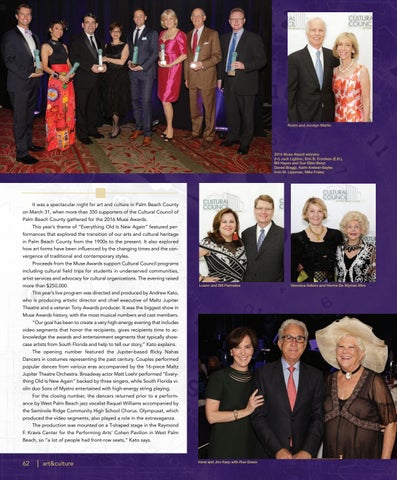 It was a spectacular night for art and culture in Palm Beach County on March 31, when more than 350 supporters of the Cultural Council of Palm Beach County gathered for the 2016 Muse Awards. This year’s theme of “Everything Old Is New Again” featured performances that explored the transition of our arts and cultural heritage in Palm Beach County from the 1900s to the present. It also explored how art forms have been influenced by the changing times and the convergence of traditional and contemporary styles. Proceeds from the Muse Awards support Cultural Council programs including cultural field trips for students in underserved communities, artist services and advocacy for cultural organizations. The evening raised more than $250,000. This year’s live program was directed and produced by Andrew Kato, who is producing artistic director and chief executive of Maltz Jupiter Theatre and a veteran Tony Awards producer. It was the biggest show in Muse Awards history, with the most musical numbers and cast members. “Our goal has been to create a very high-energy evening that includes video segments that honor the recipients, gives recipients time to acknowledge the awards and entertainment segments that typically showcase artists from South Florida and help to tell our story,” Kato explains. The opening number featured the Jupiter-based Ricky N ahas Dancers in costumes representing the past century. Couples performed popular dances from various eras accompanied by the 16-piece Maltz Jupiter Theatre Orchestra. Broadway actor Matt Loehr performed “Everything Old Is New Again” backed by three singers, while South Florida violin duo Sons of Mystro entertained with high-energy string playing. For the closing number, the dancers returned prior to a performance by West Palm Beach jazz vocalist Raquel Williams accompanied by the Seminole Ridge Community High School Chorus. Olympusat, which produced the video segments, also played a role in the extravaganza. The production was mounted on a T-shaped stage in the Raymond F. Kravis Center for the Performing Arts’ Cohen Pavilion in West Palm Beach, so “a lot of people had front-row seats,” Kato says.