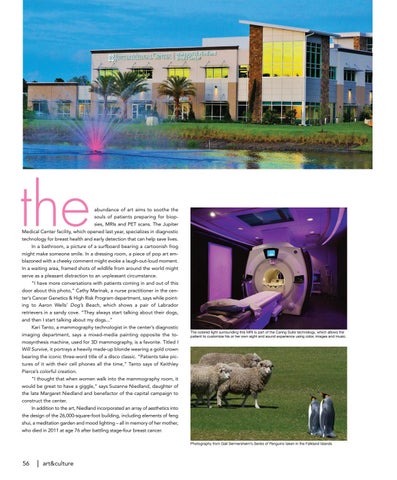 abundance of art aims to soothe the souls of patients preparing for biopsies, MRIs and PET scans. The Jupiter Medical Center facility, which opened last year, specializes in diagnostic technology for breast health and early detection that can help save lives. In a bathroom, a picture of a surfboard bearing a cartoonish frog might make someone smile. In a dressing room, a piece of pop art emblazoned with a cheeky comment might evoke a laugh-out-loud moment. In a waiting area, framed shots of wildlife from around the world might serve as a pleasant distraction to an unpleasant circumstance. “I have more conversations with patients coming in and out of this door about this photo,” Cathy Marinak, a nurse practitioner in the center’s Cancer Genetics &amp; High Risk Program department, says while pointing to Aaron Wells’ Dog’s Beach, which shows a pair of Labrador retrievers in a sandy cove. “They always start talking about their dogs, and then I start talking about my dogs...” Kari Tanto, a mammography technologist in the center’s diagnostic imaging department, says a mixed-media painting opposite the tomosynthesis machine, used for 3D mammography, is a favorite. Titled I

The colored light surrounding this MRI is part of the Caring Suite technology, which allows the patient to customize his or her own sight and sound experience using color, images and music.

Will Survive, it portrays a heavily made-up blonde wearing a gold crown bearing the iconic three-word title of a disco classic. “Patients take pictures of it with their cell phones all the time,” Tanto says of Keithley Pierce’s colorful creation. “I thought that when women walk into the mammography room, it would be great to have a giggle,” says Suzanne Niedland, daughter of the late Margaret Niedland and benefactor of the capital campaign to construct the center. In addition to the art, Niedland incorporated an array of aesthetics into the design of the 26,000-square-foot building, including elements of feng shui, a meditation garden and mood lighting – all in memory of her mother, who died in 2011 at age 76 after battling stage-four breast cancer. Photography from Gail Sermersheim’s Series of Penguins taken in the Falkland Islands