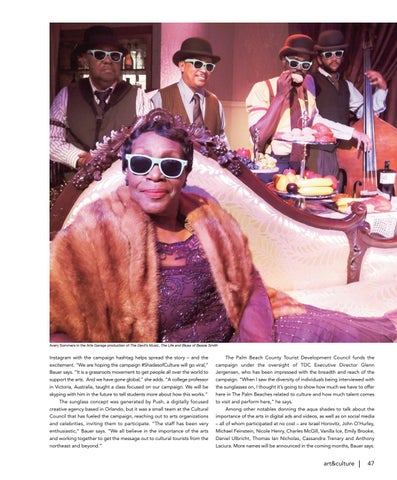 Avery Sommers in the Arts Garage production of The Devil’s Music, The Life and Blues of Bessie Smith

Instagram with the campaign hashtag helps spread the story – and the excitement. “We are hoping the campaign #ShadesofCulture will go viral,” Bauer says. “It is a grassroots movement to get people all over the world to support the arts. And we have gone global,” she adds. “A college professor in Victoria, Australia, taught a class focused on our campaign. We will be skyping with him in the future to tell students more about how this works.” The sunglass concept was generated by Push, a digitally focused creative agency based in Orlando, but it was a small team at the Cultural Council that has fueled the campaign, reaching out to arts organizations and celebrities, inviting them to participate. “The staff has been very enthusiastic,” Bauer says. “We all believe in the importance of the arts and working together to get the message out to cultural tourists from the northeast and beyond.”

The Palm Beach County Tourist Development Council funds the campaign under the oversight of TDC Executive Director Glenn Jergensen, who has been impressed with the breadth and reach of the campaign. “When I saw the diversity of individuals being interviewed with the sunglasses on, I thought it’s going to show how much we have to offer here in The Palm Beaches related to culture and how much talent comes to visit and perform here,” he says. Among other notables donning the aqua shades to talk about the importance of the arts in digital ads and videos, as well as on social media – all of whom participated at no cost – are Israel Horovitz, John O’Hurley, Michael Feinstein, Nicole Henry, Charles McGill, Vanilla Ice, Emily Brooke, Daniel Ulbricht, Thomas Ian N icholas, Cassandra Trenary and Anthony Laciura. More names will be announced in the coming months, Bauer says.