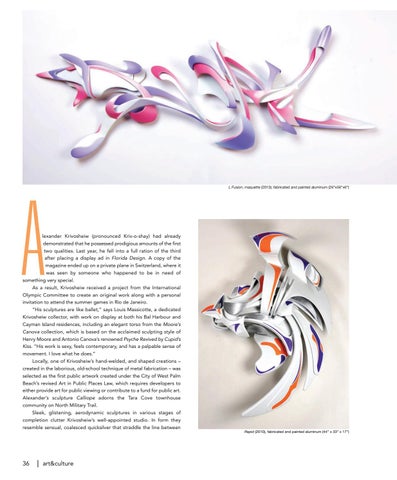 lexander Krivosheiw (pronounced Kriv-o-shay) had already demonstrated that he possessed prodigious amounts of the first two qualities. Last year, he fell into a full ration of the third after placing a display ad in Florida Design. A copy of the magazine ended up on a private plane in Switzerland, where it was seen by someone who happened to be in need of something very special. As a result, Krivosheiw received a project from the International Olympic Committee to create an original work along with a personal invitation to attend the summer games in Rio de Janeiro. “His sculptures are like ballet,” says Louis Massicotte, a dedicated Krivosheiw collector, with work on display at both his Bal Harbour and Cayman Island residences, including an elegant torso from the Moore’s

Canova collection, which is based on the acclaimed sculpting style of Henry Moore and Antonio Canova’s renowned Psyche Revived by Cupid’s Kiss. “His work is sexy, feels contemporary, and has a palpable sense of movement. I love what he does.” Locally, one of Krivosheiw’s hand-welded, and shaped creations – created in the laborious, old-school technique of metal fabrication – was selected as the first public artwork created under the City of West Palm Beach’s revised Art in Public Places Law, which requires developers to either provide art for public viewing or contribute to a fund for public art. Alexander’s sculpture Calliope adorns the Tara Cove townhouse community on North Military Trail. Sleek, glistening, aerodynamic sculptures in various stages of completion clutter Krivosheiw’s well-appointed studio. In form they resemble sensual, coalesced quicksilver that straddle the line between