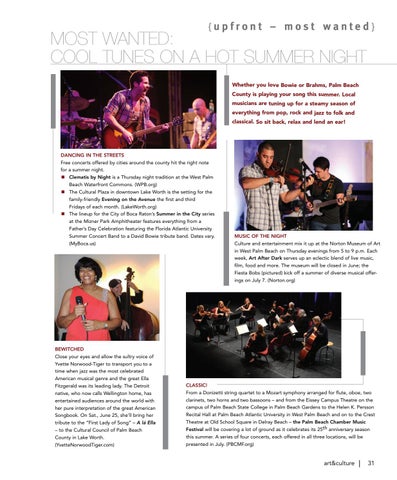 MOST WANTED: COOL TUNES ON A HOT SUMMER NIGHT Whether you love Bowie or Brahms, Palm Beach County is playing your song this summer. Local musicians are tuning up for a steamy season of everything from pop, rock and jazz to folk and classical. So sit back, relax and lend an ear!

DANCING IN THE STREETS Free concerts offered by cities around the county hit the right note for a summer night. n Clematis by Night is a Thursday night tradition at the West Palm Beach Waterfront Commons. (WPB.org) n The Cultural Plaza in downtown Lake Worth is the setting for the family-friendly Evening on the Avenue the first and third Fridays of each month. (LakeWorth.org) n The lineup for the City of Boca Raton’s Summer in the City series at the Mizner Park Amphitheater features everything from a Father’s Day Celebration featuring the Florida Atlantic University Summer Concert Band to a David Bowie tribute band. Dates vary. (MyBoca.us)

BEWITCHED Close your eyes and allow the sultry voice of Yvette Norwood-Tiger to transport you to a time when jazz was the most celebrated American musical genre and the great Ella Fitzgerald was its leading lady. The Detroit native, who now calls Wellington home, has entertained audiences around the world with her pure interpretation of the great American Songbook. On Sat., June 25, she’ll bring her tribute to the “First Lady of Song” – A lá Ella – to the Cultural Council of Palm Beach County in Lake Worth. (YvetteNorwoodTiger.com)

MUSIC OF THE NIGHT Culture and entertainment mix it up at the Norton Museum of Art in West Palm Beach on Thursday evenings from 5 to 9 p.m. Each week, Art After Dark serves up an eclectic blend of live music, film, food and more. The museum will be closed in June; the Fiesta Bobs (pictured) kick off a summer of diverse musical offerings on July 7. (Norton.org)

CLASSIC! From a Donizetti string quartet to a Mozart symphony arranged for flute, oboe, two clarinets, two horns and two bassoons – and from the Eissey Campus Theatre on the campus of Palm Beach State College in Palm Beach Gardens to the Helen K. Persson Recital Hall at Palm Beach Atlantic University in West Palm Beach and on to the Crest Theatre at Old School Square in Delray Beach – the Palm Beach Chamber Music Festival will be covering a lot of ground as it celebrates its 25th anniversary season this summer. A series of four concerts, each offered in all three locations, will be presented in July. (PBCMF.org)