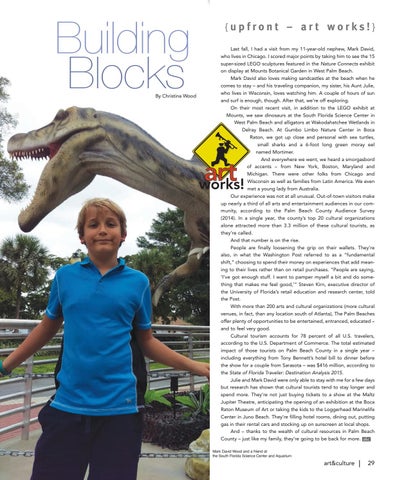 {upfront – art works!} Last fall, I had a visit from my 11-year-old nephew, Mark David, who lives in Chicago. I scored major points by taking him to see the 15 super-sized LEGO sculptures featured in the Nature Connects exhibit on display at Mounts Botanical Garden in West Palm Beach. Mark David also loves making sandcastles at the beach when he comes to stay – and his traveling companion, my sister, his Aunt Julie, who lives in Wisconsin, loves watching him. A couple of hours of sun and surf is enough, though. After that, we’re off exploring. On their most recent visit, in addition to the LEGO exhibit at Mounts, we saw dinosaurs at the South Florida Science Center in West Palm Beach and alligators at Wakodahatchee Wetlands in Delray Beach. At Gumbo Limbo N ature Center in Boca Raton, we got up close and personal with sea turtles, small sharks and a 6-foot long green moray eel named Mortimer. And everywhere we went, we heard a smorgasbord of accents – from N ew York, Boston, Maryland and Michigan. There were other folks from Chicago and Wisconsin as well as families from Latin America. We even met a young lady from Australia. Our experience was not at all unusual. Out-of-town visitors make up nearly a third of all arts and entertainment audiences in our community, according to the Palm Beach County Audience Survey (2014). In a single year, the county’s top 20 cultural organizations alone attracted more than 3.3 million of these cultural tourists, as they’re called. And that number is on the rise. People are finally loosening the grip on their wallets. They’re also, in what the Washington Post referred to as a “fundamental shift,” choosing to spend their money on experiences that add meaning to their lives rather than on retail purchases. “People are saying, ‘I’ve got enough stuff. I want to pamper myself a bit and do something that makes me feel good,’” Steven Kirn, executive director of the University of Florida’s retail education and research center, told the Post. With more than 200 arts and cultural organizations (more cultural venues, in fact, than any location south of Atlanta), The Palm Beaches offer plenty of opportunities to be entertained, entranced, educated – and to feel very good. Cultural tourism accounts for 78 percent of all U.S. travelers, according to the U.S. Department of Commerce. The total estimated impact of those tourists on Palm Beach County in a single year – including everything from Tony Bennett’s hotel bill to dinner before the show for a couple from Sarasota – was $416 million, according to the State of Florida Traveler: Destination Analysis 2015. Julie and Mark David were only able to stay with me for a few days but research has shown that cultural tourists tend to stay longer and spend more. They’re not just buying tickets to a show at the Maltz Jupiter Theatre, anticipating the opening of an exhibition at the Boca Raton Museum of Art or taking the kids to the Loggerhead Marinelife Center in Juno Beach. They’re filling hotel rooms, dining out, putting gas in their rental cars and stocking up on sunscreen at local shops. And – thanks to the wealth of cultural resources in Palm Beach County – just like my family, they’re going to be back for more.