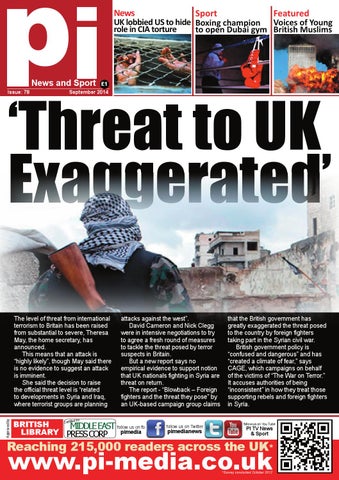 The level of threat from international terrorism to Britain has been raised from substantial to severe, Theresa May, the home secretary, has announced. This means that an attack is “highly likely”, though May said there is no evidence to suggest an attack is imminent. She said the decision to raise the official threat level is “related to developments in Syria and Iraq, where terrorist groups are planning y rtified b

attacks against the west”. David Cameron and Nick Clegg were in intensive negotiations to try to agree a fresh round of measures to tackle the threat posed by terror suspects in Britain. But a new report says no empirical evidence to support notion that UK nationals fighting in Syria are threat on return. The report - “Blowback – Foreign fighters and the threat they pose” by an UK-based campaign group claims

that the British government has greatly exaggerated the threat posed to the country by foreign fighters taking part in the Syrian civil war. British government policy is “confused and dangerous” and has “created a climate of fear,” says CAGE, which campaigns on behalf of the victims of “The War on Terror.” It accuses authorities of being “inconsistent” in how they treat those supporting rebels and foreign fighters in Syria. follow us on You Tube