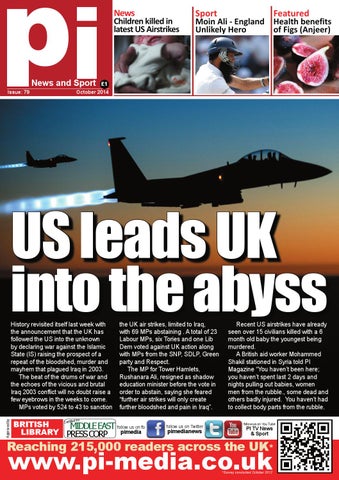 Children killed in latest US Airstrikes

US leads UK into the abyss

History revisited itself last week with the announcement that the UK has followed the US into the unknown by declaring war against the Islamic State (IS) raising the prospect of a repeat of the bloodshed, murder and mayhem that plagued Iraq in 2003. The beat of the drums of war and the echoes of the vicious and brutal Iraq 2003 conflict will no doubt raise a few eyebrows in the weeks to come. MPs voted by 524 to 43 to sanction y rtified b

the UK air strikes, limited to Iraq, with 69 MPs abstaining . A total of 23 Labour MPs, six Tories and one Lib Dem voted against UK action along with MPs from the SNP, SDLP, Green party and Respect. The MP for Tower Hamlets, Rushanara Ali, resigned as shadow education minister before the vote in order to abstain, saying she feared “further air strikes will only create further bloodshed and pain in Iraq”.

Recent US airstrikes have already seen over 15 civilians killed with a 6 month old baby the youngest being murdered. A British aid worker Mohammed Shakil stationed in Syria told PI Magazine “You haven’t been here; you haven’t spent last 2 days and nights pulling out babies, women men from the rubble., some dead and others badly injured. You haven’t had to collect body parts from the rubble. follow us on You Tube