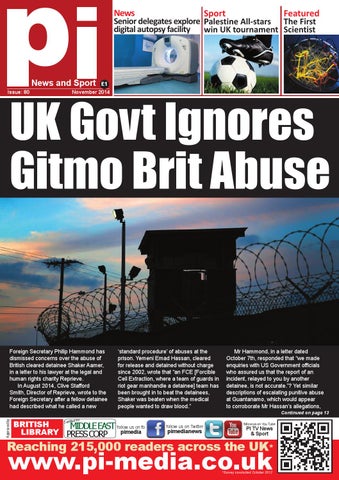 Foreign Secretary Philip Hammond has dismissed concerns over the abuse of British cleared detainee Shaker Aamer, in a letter to his lawyer at the legal and human rights charity Reprieve. In August 2014, Clive Stafford Smith, Director of Reprieve, wrote to the Foreign Secretary after a fellow detainee had described what he called a new d by Certifie

‘standard procedure’ of abuses at the prison. Yemeni Emad Hassan, cleared for release and detained without charge since 2002, wrote that “an FCE [Forcible Cell Extraction, where a team of guards in riot gear manhandle a detainee] team has been brought in to beat the detainees, Shaker was beaten when the medical people wanted to draw blood.”

Mr Hammond, in a letter dated October 7th, responded that “we made enquiries with US Government officials who assured us that the report of an incident, relayed to you by another detainee, is not accurate.”? Yet similar descriptions of escalating punitive abuse at Guantanamo, which would appear to corroborate Mr Hassan’s allegations,