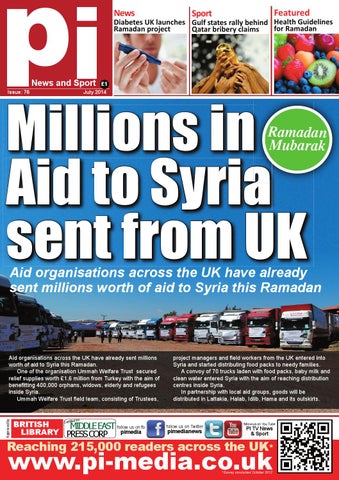 Millions in Aid to Syria sent from UK Issue: 76

Aid organisations across the UK have already sent millions worth of aid to Syria this Ramadan. One of the organisation Ummah Welfare Trust secured relief supplies worth ÂŁ1.6 million from Turkey with the aim of benefitting 400,000 orphans, widows, elderly and refugees inside Syria. Ummah Welfare Trust field team, consisting of Trustees,

project managers and field workers from the UK entered into Syria and started distributing food packs to needy families. A convoy of 70 trucks laden with food packs, baby milk and clean water entered Syria with the aim of reaching distribution centres inside Syria. In partnership with local aid groups, goods will be distributed in Lattakia, Halab, Idlib, Hama and its outskirts.