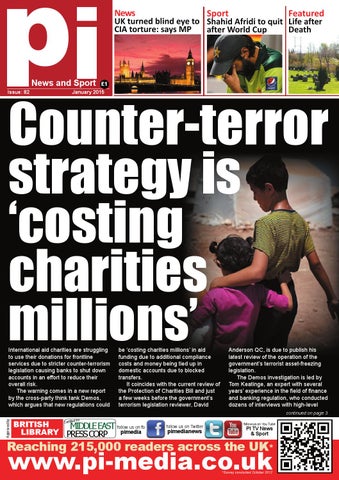 International aid charities are struggling to use their donations for frontline services due to stricter counter-terrorism legislation causing banks to shut down accounts in an effort to reduce their overall risk. The warning comes in a new report by the cross-party think tank Demos, which argues that new regulations could

be ‘costing charities millions’ in aid funding due to additional compliance costs and money being tied up in domestic accounts due to blocked transfers. It coincides with the current review of the Protection of Charities Bill and just a few weeks before the government’s terrorism legislation reviewer, David

Anderson QC, is due to publish his latest review of the operation of the government’s terrorist asset-freezing legislation. The Demos investigation is led by Tom Keatinge, an expert with several years’ experience in the field of finance and banking regulation, who conducted dozens of interviews with high-level

continued on page 3 d by Certifie