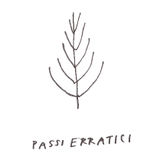 Passi Erratici is a series of residencies and shows about art and mountain. In 2014 the project started reflecting on the human desire for discovery and adventure. The exhibition was hosted at the National Mountain Museum in Turin and at the Exilles Fort in Exilles. The residency took place around Monviso. In 2015 Passi Erratici focused on the consequences of a discovery or conquest and the relationship that occurs between cities and mountains, human landscape and wilderness. The second edition of the show took place from July to September 2015 at the National Mountain Museum while the residency was set in Cervinia. The 2016 edition begun with a itinerary residency between Piedmont and Valle d'Aosta and the final show was held at Merz Foundation. 2017 and 2018 editions were held at Paraloup, Valle Stura. If you scroll down a little further you'll find Passi Erratici digital catalogues. Enjoy!