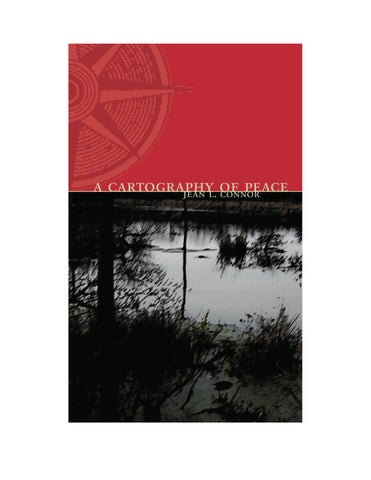 A CARTOGRAPHY OF PEACE

Of Some Renown The Gift After Vacationing in Maine Late August Family Stories The Town Where They Live An Old Man Waits Absence The Anchored Boat The Loon on Frenchmanâ&#x20AC;&#x2122;s Bay Jonathan Apples, Macouns and More Possibly a Crow Almost Night

Only One Block Long Now, in March Despite Wind and Strong Rain Looking for Spring Returning

The Women There Was a Hypochondriac Profile Riding to Hounds and Other Papers The Baguette,The Umbrellas Somewhere Driving Route 4 in July When He Came Home

The Dutch Landscape in Our Dining Room A Kind of Parchment From the Observation Deck S.S. Universe Explorer Glacier Bay, Alaska

of some renown For some time now, I have lived anonymously. No one appears to think it odd. They think the old are, well, what they seem. Yet see that great egret at the marshâ&#x20AC;&#x2122;s edge, solitary, still? Mere pretense that stillness. His silence is a lie. In his own pond he is of some renown, a stalker, a catcher of fish. Watch him.

almost night Quick flight of a bird across the field that lies outstretched before the night. Only silence in the going. Late, late. And a cool mist rising. Unknown the name, unknown the color, the only certitude, the dark trajectory of flight.

despite wind and strong rain I took hold of the darkness and shook it, filling the emptiness with names: daffodils, narcissus, jonquils, trumpet, bi-color, cluster-flowered, Thalia, sweet-scented, pendant, King Alfred, Sentinel and Pinza. Rooted in the darkness, pushing up in search of light, the names turned what they looked on to yellow, apricot or white. I remember the bright waltzes, the fragrance, the feather-weight of day. And we, we bore the sheen once more. How luminous is joy.

looking for spring At the foot of Old Harbor Road, snow banks, spattered, spoiled, mark the place where the plows stopped. If the snow has begun to melt, I cannot see it, the mounds, stolid, coarse. No red-wings yet, only a desultory crow and the voice of mourning doves complaining. The maple trees have not divulged their sweet. So how does the dialogue of green begin? Is affirmation found without or must it rise within? How shall our unbinding begin? Even now, shrouded in this chrysalis, are we urged to sing?

allegro: a may song for nesting swallows and flute Lay claim my love. This flowering tree is ours, this sweet aperture our home. Now the high notes, reedy, clear. Listen. Music, dipped in azure, ripples towards the sun. Ascend. Ascend. Join forces with the flute. Come breast the sky, the gentian sky. Turn. Turn. Scissor the fabric, release the tethered world.

summer Every solstice should be as this one, suspended between evening and the slow coming on of stars, the great bear first, then the jeweled crown. Let every solstice pause, linger in a meadow, imagined or real, blue with lupine, the fields wide, the self small, a place afloat between this fixed earth and the transparencies of clouds. Give silence room, there anger seeps away. Out of the hidden, fireflies may come to semaphore a blessing. Beneath the deepening sky, bright wands and an old cartography of peace.

the baguette, the umbrellas The promised rain was mist. Workers, half-spent, made their way home. Nothing was clear to them except carrying the same gray umbrellas in the morning and bringing them home again at night. It was tiring,

should they? The workers don’t look up to the lighted window where the couple breaks the baguette, declares the wine good. How complex it becomes, this poetry of umbrellas, furled and unfurled, the red

the tyranny of small things, of indecisiveness. They never saw Henri, we shall call him that, who carried a freshly baked baguette projecting from a bag, like a long-stemmed rose to give her.

rose that was not a red rose, the small tyrannies and endings that may have held a beginning, everyone so unaware. But there was one fixed point, a fresh baguette positioned at the center, noted in passing.

She would set a small table, light a candelabra, and from their window, they’d look down on wet pavements, workers going home, the gray umbrellas, but not see them. Why

how the day ended All day, a sullen wind. Poets culled out metaphors, the hawk for death, the rose for innocence, the fox as watchfulness, while all the while the high thin clouds moved unnoticed towards the west. The clouds dissembling,

mutual After the snow, in plunging cold, goldfinches flock to my feeder and I, at the window, feed and feast on the sight – the world up-righted again by so slight a thing as thistle seed and favor.

one moment as flying fish, then gliding forth as pure white swans, returned to some fixed point beyond the ridge, beyond the penciled harmony of mountains, spruce and pine. There at a crossing marked by flame, they faced the real, the fierce, the untuned night, went down burning.

about the author Jean L. Connor has spent most of her life in New York State and Vermont. A graduate of Middlebury College and Columbia University, she worked as a librarian for over 30 years in New York State. After retiring, she began writing poetry. She attended several workshops around the country, including The Atlantic Center for the Arts where she studied with William Stafford. In 2001, she won Passager literary journalâ&#x20AC;&#x2122;s poetry contest for writers over fifty. She lives and writes at Wake Robin retirement community in Shelburne, Vermont. This is her first book of poems. 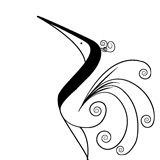 Sample: A Cartography of Peace

Sample: A Cartography of Peace