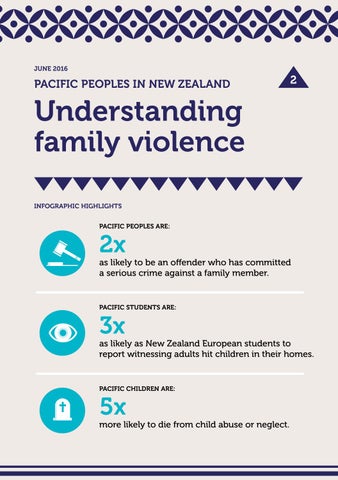 as likely to be an offender who has committed a serious crime against a family member.

as likely as New Zealand European students to report witnessing adults hit children in their homes.

more likely to die from child abuse or neglect.

Some factors when thinking about family violence RESILIENCE FACTORS

Pacific children are over-represented among poor children in New Zealand.

Pacific peoples in New Zealand are a youthful population.

Almost one third of Pacific women aged 20–24 years are mothers.

of the total New Zealand population.

Pacific adults are more likely to be anxious or depressed. 2x

Pacific adults are less likely to drink alcohol but those who do drink are more likely to be hazardous drinkers.

more likely to experience high levels of psychological distress indicating a high probability of an anxiety or depressive disorder.

Pacific children are two times 2x as likely to be physically punished.

Pacific peoples were more likely than the New Zealand average to have been victims of crime.

Pacific students were three and a half times as likely to report witnessing adults hitting other adults in their home.

2x Pacific students were also twice as likely to report having experienced sexual abuse or coercion than their New Zealand European counterparts.

Pacific peoples are no more likely to be a victim of a violent interpersonal offence by an intimate partner.

The prevalence of intimate partner violence has fallen among Pacific peoples.

Pacific peoples are more likely to experience one or more coercive and controlling behaviours from a current partner.

Almost a third of all family violence deaths in New Zealand are children as a result of abuse and neglect.

Half of all homicides in New Zealand are family related.

37 are child abuse and neglect deaths.

who died from abuse and neglect between 2009 and 2012 are Pacific children.

of unique offenders* who perpetrated a serious crime against a family member were Pacific offenders in 2015.

of prison inmates are Pacific peoples.

of total children who require FAR

of total children who have substantiated abuse findings

of total children with neglect findings

Why take action now? Knowing who is at risk of poor outcomes later in life will help us know where we need to target our efforts and investment. Recent analysis undertaken by Treasury to understand children who are at risk of poor outcomes and the costs (CYF, benefit and Corrections costs) associated with those outcomes showed that total costs of Pacific children in the cohort before age 36 were estimated as averaging $80,400.

Pacific children will make up almost one fifth of all New Zealand children by 2038. The Pacific population will continue to have a much younger age structure than the total New Zealand population due to higher Pacific birth rates.