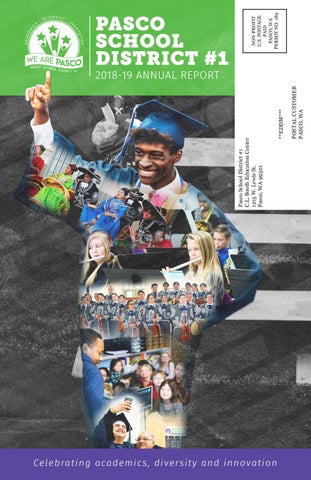 YOUR PASCO SCHOOLS is published by the Pasco School District Public Affairs Department as a community service to Pasco citizens. Questions and/or comments may be directed to publicaffairs@ psd1.org or 509-546-2686.

NOTICE OF NONDISCRIMINATION: Pasco School District does not discriminate in any programs or activities on the basis of sex, race, creed, religion, color, national origin, age, veteran or military status, sexual orientation, gender expression or identity, disability, or the use of trained guide dog or service animal. Pasco School District provides equal access to the Boy Scouts, Girl Scouts, and other designated youth groups. Questions and complaints of alleged discrimination should be addressed to the following designated employees: Title IX and Civil Rights Compliance OfficerSarah Thornton; 1215 W. Lewis St., Pasco, WA 99301, 509-543-6700, sthornton@psd1.org; and Sec. 504 Coordinator-Charlotte Stingley, 1215 W. Lewis St., Pasco, WA 99301, 509-5436700, cstingley@psd1.org. Pasco School District is committed to providing access to all individuals, with or without disabilities, seeking information on our website. The District, in evaluating and planning for accessibility, will adhere to the standards of the World Wide Web Consortium’s Web Content Accessibility Guidelines (WCAG) 2.0 Level AA and the Web Accessibility Initiative Accessible Rich Internet Applications Suite (WAI-ARIA) 1.0 for web-based content. If, because of a disability, you are unable to access content on Pasco School District’s website, you have questions about the accessibility of content or technology used by the District, and/or would like to report barriers to accessing any technology used by the District, including this website, please email cgalvez@psd1.org. For information about the formal complaint procedure, please contact the District’s Compliance Coordinator, Sarah Thornton, at sthornton@psd1.org.

ON TRACK FOR GRADUATION

GRADUATE WITH A CAREER PATH

100% of students will graduate with a career path

ALL STUDENTS ARE CAPABLE OF SUCCESS

To learn more about our OUTRAGEOUS OUTCOMES and the steps we are taking to achieve them, please visit www.psd1.org/outcomes

PASCO BY THE N

The state officially adopted the new Washington state standards into law in 2011. The Smarter Balanced Assessment (SBA) exams were developed to assess the new state standards using the common core framework. In spring 2015, the SBA was used only for accountability purposes for all schools. In states that have transitioned to the SBA, scores typically dropped approximately 40 percentage points in transitioning to the new exams. Washington was no exception. All 10th grade students must take the SBA tests in ELA and math for federal accountability requirements. Students who pass the ELA SBA will have satisfied their ELA graduation requirements. Students who pass the math SBA will also have satisfied their math graduation requirement. All students in grade 11 participate in the WCAS (Washington Comprehensive Assessment of Science) test for federal accountability requirements. There are also alternative pathways for students who need to demonstrate their skills in a different way. For more information, visit the Graduation Alternatives page on OSPI’s website: http://k12.wa.us/assessment/GraduationAlternatives/default.aspx For questions about state assessments, contact PSD’s Director of Special Programs and Assessment Shellie Hatch at (509) 543-6700, Ext. 2384 or your school’s principal.

CLOSING THE GAP An important way for Pasco to assess system-wide improvement is to review tenth grade scores disaggregated by English language proficiency. Tenth grade scores reflect student performance for the whole system from kindergarten through tenth grade. Carefully reviewing results broken out by levels of English proficiency provides a more meaningful and relevant assessment of Pascoâ&amp;#x20AC;&amp;#x2122;s progress and lays the groundwork for solid decision making. Students new to the country and who do not yet speaking English perform poorly on the State assessments. Pasco students who learn English in PSD, through our late-exit bilingual model, are closing the achievement gap in reading, writing and math by 10th grade! English: Students from homes where only English is spoken. English Language Learners (ELL): Students who are not yet English proficient as determined by the state assessment. They could also be newly arrived students. Exited ELL: Students who were non- or limited-English speakers, but have now learned enough English to exit the bilingual program under the state law. Non-English Home Language, Non-ELL: These students come from homes where a language other than English is spoken. When assessed upon entry, students were determined English proficient under state law.

• Partners in Educating All Kids!, or PEAK! is a program established in 2008 to bring families, schools and community organizations together to cultivate relationships in the Pasco School District. • Since PEAK! began, partners have provided students with access to programs and information enhancing their education.

Thank you to our 2018-19 PEA ¡Agradecemos a nuestros socios 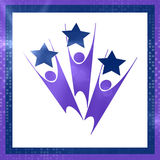