Press Release on The Gift from a Director 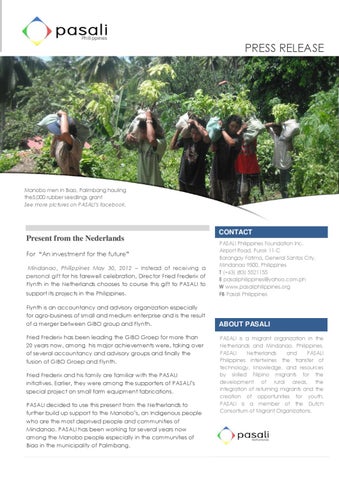 Present from the Nederlands

support its projects in the Philippines.

Flynth is an accountancy and advisory organization especially for agro-business of small and medium enterprise and is the result of a merger between GIBO group and Flynth.

For “An investment for the future” Mindanao, Philippines May 30, 2012 – Instead of receiving a personal gift for his farewell celebration, Director Fried Frederix of Flynth in the Netherlands chooses to course this gift to PASALI to

Fried Frederix has been leading the GIBO Groep for more than 20 years now, among his major achievements were, taking over of several accountancy and advisory groups and finally the fusion of GIBO Groep and Flynth. Fried Frederix and his family are familiar with the PASALI initiatives. Earlier, they were among the supporters of PASALI’s special project on small farm equipment fabrications. PASALI decided to use this present from the Netherlands to further build up support to the Manobo’s, an Indigenous people who are the most deprived people and communities of Mindanao. PASALI has been working for several years now among the Manobo people especially in the communities of Biao in the municipality of Palimbang.

PASALI is a migrant organization in the Netherlands and Mindanao, Philippines. PASALI Netherlands and PASALI Philippines intertwines the transfer of technology, knowledge, and resources by skilled Filipino migrants for the development of rural areas, the integration of returning migrants and the creation of opportunities for youth. PASALI is a member of the Dutch Consortium of Migrant Organizations.

Press Release on The Gift from a Director 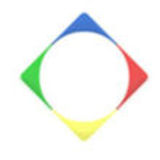