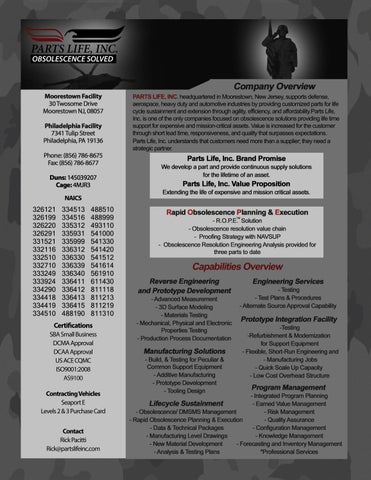 Manuf act ur i ng

Employees: 10 When he founded Parts Life in Cinnaminson in 2007, Sam Thevanayagam envisioned creating a new company to supply parts to the auto industry. Then he went to Detroit and got an eye-opening experience. “I could see they were already crying uncle and looking for bailout money,” he said. The result was a rapid course correction, and Parts Life became a supplier of replacement parts for military equipment instead. It turned out to be the right move. Thevanayagam said the company is growing more t h a n 25 percent year, with revenue of about $ 10 million. Thevanayagam, 50, had spent more than a decade at Philadelphia-based Cardone Industries, a leading supplier o f auto parts, so building a similar business made perfect sense. He had risen to vice president at Cardone before leaving in 2000 to become a consultant w h o advised businesses on strategic sourcing and supply.

Revenue (2012): About $10 million Website: partslifeinc.com One more thing: Thevanayagam’s was self-employed in his first job, washing faculty cars on the weekends while in college. He keeps a framed car wash schedule in his office to remember those early days.

Parts Life is growing more than 25 percent a year, according to Sam Thevanayagam, who founded the Cinnaminson company in 2007. It supplies replacement parts for military equipment. – AARON HOUSTON

it needs replacement parts for used equipment: the parts simply can’t be found. “We supply quite a few valves, for example, because the valves become obsolete if the original equipment manufacturer is not around or the OEM is no longer supporting the item.” He said Parts Life has made parts for the Aegis naval weapons

system and the Humvee military automobile. Parts Life has 10 employees and does the engineering work, with the parts themselves being made by contract manufacturers. Thevanayagam said his engineers will often do reverse engineering to come up with the specifications needed to manufacture the replacement parts for the military.

Doing Business with Uncle Sam The pivot from auto parts to military supplier in the early days of Parts Life illustrates the advice he gives would-be entrepreneurs: “You need to have quick feet and you need to fail fast, which means you have to try something.” And then, he says, try something else if your first idea doesn’t work. Thevanayagam said Parts Life addresses a problem the military often confronts when

Three lessons Sam Thevanayagam has learned about doing business with the federal government: BE PREPARED: You need experience and a track record to convince the government that you can do the job. BE PATIENT: Be persistent: getting through government bureaucracy takes time. BE ADAPTIVE: You have to keep growing, learning and asking questions to make it in the government marketplace. And be prepared to bounce back from setbacks like a contract cancellation.

“We provide solutions for expensive and mission critical assets used by the military — either to support the troops from a logistics standpoint or equipment that is actually used in combat,” he said. Thevanayagam said he had wanted to become an entrepreneur since he was in his 20s, “and it is a good thing that I waited until

was older and knew what to do.” He raised nearly $200,000 in capital to start Parts Life from credit cards, cashing in his 401k plan and selling his house and putting some of the equity into the business. His timing has worked out. The current climate of federal budget cuts, and the pressure on all federal spending from sequestration, is helping to create more demand for what Parts Life does, Thevanayagam said. “A lot of the (military) programs and platforms that were scheduled to take off have either been pushed out or have been delayed,” he said. The military thus needs to extend the life of existing equipment, “and that’s where we come in,” he said. He said his company helps taxpayers. “We extend the life of assets that we (the taxpayers) have already paid for,” he said. “Anytime we can extend the life of an asset, and it doesn’t have to be mothballed, we are preventing a future buy.” E-mail to: beth@njbiz.com On Twitter: @bethfitzgerald8