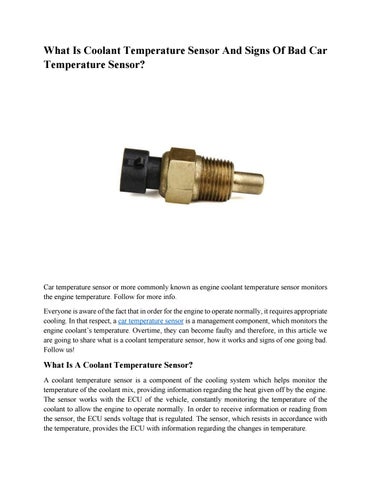 Signs of a Faulty Coolant Temperature 1. Poor Fuel economy The first symptom related to a faulty coolant temperature is poor fuel economy. If the sensor is faulty, it will result in poor economy of the vehicle by throwing off calculations of both fuel and timing. When it fails, it will send a signal to the ECU indicating that the engine is cold, whereas it is not, resulting in the engine to use more fuel.

2. Black Smoke Another sign of a faulty coolant temperature is the engine throwing black smoke. In this case, the faulty sensor will indicate that the engine is cold, resulting in the ECU to use more fuel, ultimately causing a lean fuel mixture. If the mixture becomes too fuel enriched, the fuel will not burn properly in the combustion chamber, burning up your exhaust pipes and resulting in black smoke.

3. Overheating Engine Opposite to a sensor sending a cold signal, it can also misinform the engine about overheating. In this case, the sensor will permanently be sending a hot signal, causing the engine to compensate incorrectly for the lean signal, resulting in overheating and sometimes engine misfiring.

4. Check Engine Light Turns On In some cases, the check engine light in the dashboard will turn on. This indicates that there is a problem with either the signal or the circuit of the sensor. The check engine light is supposed to remain turned on until the issue is fixed. Even though the check engine light could turn on due to many other cases as well and you will have to get your car scanned to diagnose the problem. Regardless, if you happen to observe something suspicious with your vehicle, you should immediately get it checked. Vehicles have multiple sensors that are constantly providing information to the ECU. In case of any one becoming faulty, you shall observe varying signs and symptoms.

Conclusion Concluding, the car temperature sensor is the only thing that keeps your vehicleâ&#x20AC;&#x2122;s temperature maintained to start with. If it is faulty, it will not allow the engine to operate normally altogether even if the radiator and other cooling components are perfect. Therefore, if there is an issue related to the sensor, address it as soon as possible. 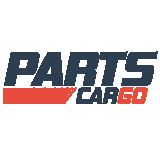 PartsCargo is an online shop for OEM or aftermarket vehicle parts and accessories. PartsCargo has a huge stock of OEM and Aftermarket auto p...

PartsCargo is an online shop for OEM or aftermarket vehicle parts and accessories. PartsCargo has a huge stock of OEM and Aftermarket auto p...