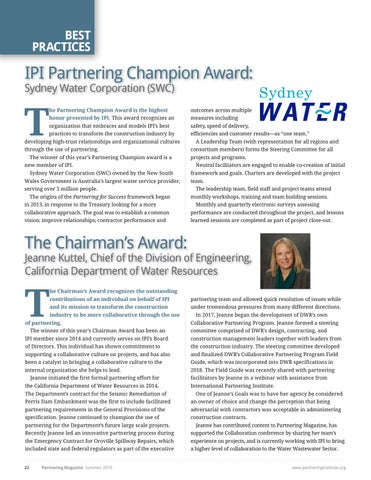 he Partnering Champion Award is the highest

honor presented by IPI. This award recognizes an

practices to transform the construction industry by

efficiencies and customer results—as “one team.”

developing high-trust relationships and organizational cultures through the use of partnering. The winner of this year’s Partnering Champion award is a new member of IPI. Sydney Water Corporation (SWC) owned by the New South Wales Government is Australia’s largest water service provider, serving over 5 million people. The origins of the Partnering for Success framework began in 2013, in response to the Treasury looking for a more

A Leadership Team (with representation for all regions and consortium members) forms the Steering Committee for all projects and programs. Neutral facilitators are engaged to enable co-creation of initial framework and goals. Charters are developed with the project team. The leadership team, field staff and project teams attend monthly workshops, training and team building sessions. Monthly and quarterly electronic surveys assessing

collaborative approach. The goal was to establish a common

performance are conducted throughout the project, and lessons

learned sessions are completed as part of project close-out.

Jeanne Kuttel, Chief of the Division of Engineering, California Department of Water Resources

partnering team and allowed quick resolution of issues while

and its mission to transform the construction

under tremendous pressures from many different directions.

industry to be more collaborative through the use

of partnering. The winner of this year’s Chairman Award has been an

In 2017, Jeanne began the development of DWR’s own Collaborative Partnering Program. Jeanne formed a steering committee comprised of DWR’s design, contracting, and

IPI member since 2014 and currently serves on IPI’s Board

construction management leaders together with leaders from

of Directors. This individual has shown commitment to

supporting a collaborative culture on projects, and has also

been a catalyst in bringing a collaborative culture to the

Guide, which was incorporated into DWR specifications in

internal organization she helps to lead.

2018. The Field Guide was recently shared with partnering

Jeanne initiated the first formal partnering effort for the California Department of Water Resources in 2014. The Department’s contract for the Seismic Remediation of

facilitators by Jeanne in a webinar with assistance from International Partnering Institute. One of Jeanne’s Goals was to have her agency be considered

Perris Dam Embankment was the first to include facilitated

an owner of choice and change the perception that being

partnering requirements in the General Provisions of the

adversarial with contractors was acceptable in administering

specification. Jeanne continued to champion the use of

supported the Collaboration conference by sharing her team’s

the Emergency Contract for Oroville Spillway Repairs, which

experience on projects, and is currently working with IPI to bring

included state and federal regulators as part of the executive

a higher level of collaboration to the Water Wastewater Sector. 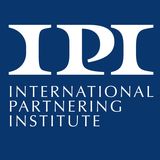