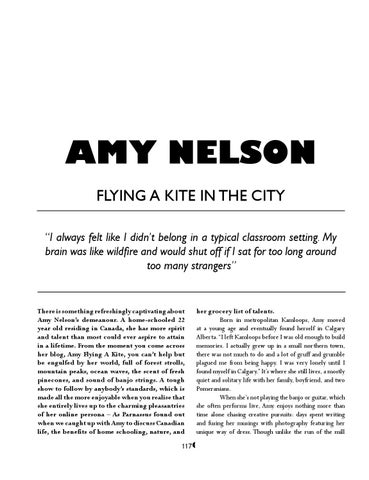 AMY NELSON FLYING A KITE IN THE CITY “I always felt like I didn’t belong in a typical classroom setting. My brain was like wildfire and would shut off if I sat for too long around too many strangers”

There is something refreshingly captivating about Amy Nelson’s demeanour. A home-schooled 22 year old residing in Canada, she has more spirit and talent than most could ever aspire to attain in a lifetime. From the moment you come across her blog, Amy Flying A Kite, you can’t help but be engulfed by her world, full of forest strolls, mountain peaks, ocean waves, the scent of fresh pinecones, and sound of banjo strings. A tough show to follow by anybody’s standards, which is made all the more enjoyable when you realise that she entirely lives up to the charming pleasantries of her online persona – As Parnassus found out when we caught up with Amy to discuss Canadian life, the benefits of home schooling, nature, and

her grocery list of talents. Born in metropolitan Kamloops, Amy moved at a young age and eventually found herself in Calgary Alberta. “I left Kamloops before I was old enough to build memories. I actually grew up in a small northern town, there was not much to do and a lot of gruff and grumble plagued me from being happy. I was very lonely until I found myself in Calgary.” It’s where she still lives, a mostly quiet and solitary life with her family, boyfriend, and two Pomeranians. When she’s not playing the banjo or guitar, which she often performs live, Amy enjoys nothing more than time alone chasing creative pursuits: days spent writing and fusing her musings with photography featuring her unique way of dress. Though unlike the run of the mill 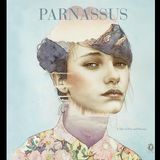