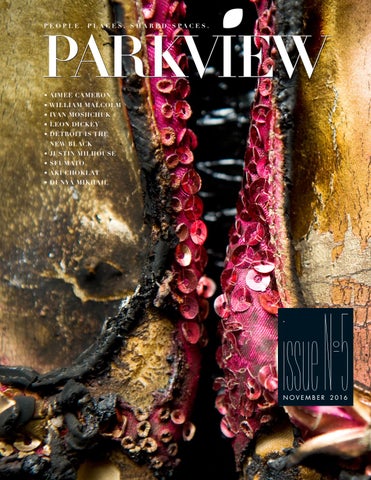 An intimate exchange with sculptor and painter AIMEE CAMERON

as she discusses creative exploration, inspiration, and life as a mother and wife. PHOTOGRAPHY: L I S A TEXT: L A U R E N J .

oyal Oak, Michigan–based sculptor and painter Aimee Cameron can still vividly recall her first creative experience as a child. Cameron was in the fourth grade when she won her first award for depicting a scene from an Easter egg hunt event that she attended. She happily reminisced about the inspiration for the drawing that her parents still have today, sharing the tale of how she accidently slipped upon the coveted golden egg that everyone sought. Prompted by her grandmother to pick up the egg, Cameron won the competition and, with her family’s support, has been falling into life in the same way ever since. Upon my arrival at the door of the multi-faceted artist’s cozy bungalow, I was greeted by Sawyer, her friendly black-and-white parti poodle. A quick glance around the room revealed that I was in the presence of an insightful creative spirit whose mind I was eager to explore.

in her home studio.

Designer WILLIAM MALCOLM opens up about his creative process, teaming up with Lincoln, and designing for Mali Music. PHOTOGRAPHY: J O N A D A M S TEXT: L A U R E N J . W I L L I A M S

n occasion, generations cross paths, offering a space of insight and inspiration, perspective and influence that contributes to a movement of energy and enlightenment among people. Music, in fact, offers all of those things. Deemed the universal language, music brings people together and provides a sense of harmony. Ivan Moshchuk is a Moscow-born classical pianist who came to the United States at age four by way of his father and family. Now twenty-five, Moshchuk is full of wisdom with a philosophical view on life, music, culture, and experiences that is rare among his contemporaries. “I was born in Moscow. When I was four, I came here to the States. My father was working at Wayne State University, living on Cass Avenue. That was my first U.S. experience. He came here first then my mother, brother, and I came about one year later and settled in Dearborn. Growing up we didn’t have much but my parents made so many opportunities happen for me that I never noticed. They hid our struggles so well. We didn’t have a piano then. But another year later we moved to Grosse Pointe. My mother saw a big old upright piano and bought it from a garage sale for $100. It was not a very good instrument but I loved it, I started playing it, and my parents signed me up for lessons thereafter,” Moshchuk says. Coming from a family of somewhat humble beginnings, Ivan was not born into a genetic pool of artistic people. As he tells it, his family did, however, love music. Music was always in the house as he grew up. He recalls how his training in music began. “There was an elderly lady, a pianist, who lived in Farmington Hills. She retired to Michigan, after living her whole life in St. Petersburg, Russia. She was connected to an incredible Russian music tradition so my mother asked if she would consider taking me as a student. One day, I went to her with my mom. I played for her and she

LEON DICKEY at his Wyandotte home.

t the tender age of seven years old, Leon Dickey and his classmates were asked to draw a turkey – by tracing their fingers – for Thanksgiving. Dickey drew his turkey and the teacher loved it so much she pinned it to the class board as an example for the other students. Dickey fondly remembers that single event because it’s when he says he found his calling. “Ever since that moment I knew that was what I would do. That was my way of connecting,” explains Dickey. His family traveled constantly growing up, so Dickey says that he would stay to himself and draw as an outlet. He didn’t try making friends because he knew his family would be moving to another city soon. “I changed schools constantly and so drawing was always a way for me to be with myself because kids can be brutal and changing schools...it was not fun,” he says. Moving was a regular occurrence for Dickey as a child, yet his family always found their way back to Detroit. “I’ve lived in Detroit off and on my whole life. I was born in Tennessee and from the age of about five or six my family started moving,” says Dickey. “We moved to Detroit and then from Detroit we moved to Chicago. Then from Chicago we moved to Florida and from Florida we moved to Tennessee again. Then back to Detroit and from Detroit to New York, where I spent 10 years, then moved back to Detroit. I must’ve lived in 50 places in Detroit, 50 places in New York, and 50 places in Chicago.” Dickey continued to develop his drawing talent and pursue his passion for art and all things creative, regardless of where the family resided. “I was very fascinated by all the arts: photography, dance, music, sculpture. It wasn’t all about drawing. I was completely exploring all the different facets of art,” says Dickey. Through the years he’s perfected his drawing and sculpting using life experiences and opportunities as a teacher. “The only thing I wanted to be was 18 and free and on my own and independent. I never went to art school or any sort of academy. I’m completely unacademic. I have no art study background at all. I’m street. My style doesn’t necessarily translate to being graffiti or as you would imagine a street artist to be. It’s bigger. My explorations of what I do in art is what I observe from the streets. When you learn things from life, from observing the way it really works – not what someone’s instructing you about from their point of view or their studies, but from your actual own experiences

of people and the way life works – the way we communicate with one another that comes from a street education. Observing the real deal being on the street not paid for study,” says Dickey. Dickey has been perfecting his art for more than three decades and now has pieces all over the world, including New York, London, Paris, Stockholm, and right here in Michigan. For the past three years, Dickey has presented an installation for the Museum of Contemporary Art Detroit’s annual gala. “My first installation for them was an all-burned collection of art where every piece was charred black. The museum took all my burned collection and they suspended it from the ceiling. So when you walked in and looked up you saw broken windows, burned chairs. It was really beautiful,” says Dickey. Dickey has an installation at the Linda Dresner store in Birmingham, which is currently on view. “Linda Dresner is the high priest of fashion. She is known throughout Europe and well respected worldwide for her presentations of couture. Linda has been very supportive. This is my fourth show at her place in Birmingham,” says Dickey. He has another installation inside Détroit is the New Black, the new chic retail gallery space on Detroit’s Woodward Avenue. Not long ago Dickey was contacted to make a unique sculpture for the Detroit Free Press building located on West Fort Street in downtown Detroit. “I was recently commissioned to do the entrance piece for the Detroit Free Press building through Jennifer Gilbert, which I’m very excited about. The Detroit Free Press building is gorgeous. It was designed by Albert Kahn and the interior structure is all stone,” he says. Deciding what to make is a creative process; Dickey says he lets it flow freely. “I don’t record things. I observe it; it’s in my head. I collect the thoughts and how I react to it,” he explains. Sometimes it’s a particular thing and sometimes it’s a collection of things that inspires him. “It’s everything! Just looking at everything, feeling everything and then when I come to the studio I just start working and it all sort of flows from that collective state of moving around in my life. There’s no prediction of ‘Oh look at that, I’m going to remember.’ It’s the way someone’s walking, the way the trees are blowing in the wind, the way a piece of trash is blowing down the road, all of it; everything,” says Dickey. Despite making art for decades, Dickey confesses that he doesn’t call himself an artist. “When someone says what do you do I just say I work. When they say well what work do you do and I say I make things, they always say oh you’re an artist, but I never say I’m an artist. It’s simply who I am. It’s as though someone were to ask you something about what you do and that what you’re doing is who you are,” explains Dickey. The artist also confesses he doesn’t have a favorite piece of his artwork and views his pieces as his children. “Truthfully it would be like asking a parent which one of these kids is your favorite. I really can’t say, not in all fairness to the other pieces. I really don’t have a preference. I love the tiny little small bits, I love the big pieces, and all in-between. I really do not have a favorite.” Dickey admits that his art is emotional and hopes that viewers can pull from their own emotions and discover something about themselves through his work. “You can’t really have control over people’s thoughts and emotions, but I would hope they would somehow feel stimulated in their own head about how to decipher what’s being said with this piece and I think through that they maybe answer questions they have in their own head about other things in their own life. I don’t do realism. I am abstract. The pieces resonate their own sort of power and I would hope that they would somehow bring joy or happiness to the viewer,” says Dickey. Having planted his roots in Michigan 10 years ago, Dickey doesn’t plan on moving anytime soon. He’s excited to see the renaissance that is taking place in parts of Detroit, wants to be a part of it and contribute. Dickey currently works out of his home in Wyandotte, a Detroit suburb. He lives with his two dogs. Although he isn’t married, Dickey does believe in love. “I believe to be truly connected with someone else in our life is the most important gift life could bring,” says Dickey. spindlerproject.com/leon-dickey

DÉTROIT IS THE NEW BLACK founder ROSLYN KARAMOKO tells of the

with Leon Dickey’s deconstructed cardboard boxes in the background.

minimalist urban brand, the movement, and collaborations with local artists like Leon Dickey and others. PHOTOGRAPHY: L I S A S P I N D L E R TEXT: L A U R E N J . W I L L I A M S

Developed Eye An interview with photographer and Detroit native 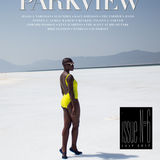