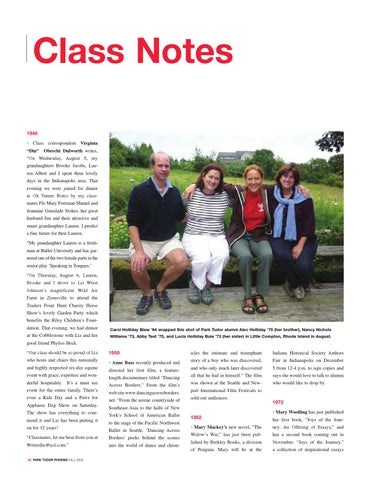 Class Notes 1946 • Class correspondent Virginia “Din” Obrecht Dulworth writes, “On Wednesday, August 5, my grandaughters Brooke Jacobs, Lauren Albert and I spent three lovely days in the Indianapolis area. That evening we were joined for dinner at Oh Yumm Bistro by my classmates Flo Mary Foreman Mantel and Jeannine Grinslade Stokes, her great husband Jim and their attractive and smart grandaughter Lauren. I predict a fine future for their Lauren. “My grandaughter Lauren is a freshman at Butler University and has garnered one of the two female parts in the senior play ‘Speaking in Tongues.’ “On Thursday, August 6, Lauren, Brooke and I drove to Liz Wiest Johnson’s magnificent Wild Air Farm in Zionsville to attend the Traders Point Hunt Charity Horse Show’s lovely Garden Party which benefits the Riley Children’s Foundation. That evening, we had dinner

at the Cobblestone with Liz and her

good friend Phyliss Heck. “Our class should be so proud of Liz who hosts and chairs this nationally and highly respected six-day equine event with grace, expertise and wonderful hospitality. It’s a must see event for the entire family. There’s even a Kids Day and a Paws for Applause Dog Show on Saturday. The show has everything to commend it and Liz has been putting it on for 32 years!

icles the intimate and triumphant

story of a boy who was discovered,

Fair in Indianapolis on December

and who only much later discovered

all that he had in himself.” The film

says she would love to talk to alumni

was shown at the Seattle and New-

directed her first film, a featurelength documentary titled “Dancing Across Borders.” From the film’s web site www.dancingacrossborders. net: “From the serene countryside of

Southeast Asia to the halls of New York’s School of American Ballet to the stage of the Pacific Northwest Ballet in Seattle, ‘Dancing Across

“Classmates, let me hear from you at

Borders’ peeks behind the scenes

into the world of dance and chron-

1972 • Mary Woolling has just published her first book, “Joys of the Jour-

ney: An Offering of Essays,” and

Widow’s War,” has just been pub-

has a second book coming out in

lished by Berkley Books, a division

November. “Joys of the Journey,”

of Penguin. Mary will be at the

a collection of inspirational essays 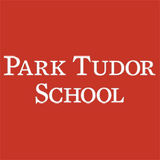