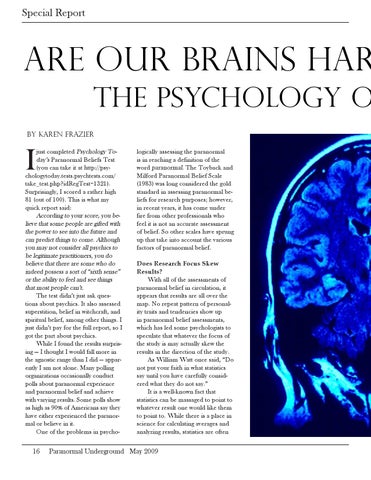 Are Our Brains Har

The Psychology o By Karen Frazier

just completed Psychology Today’s Paranormal Beliefs Test (you can take it at http://psychologytoday.tests.psychtests.com/ take_test.php?idRegTest=1321). Surprisingly, I scored a rather high 81 (out of 100). This is what my quick report said: According to your score, you believe that some people are gifted with the power to see into the future and can predict things to come. Although you may not consider all psychics to be legitimate practitioners, you do believe that there are some who do indeed possess a sort of “sixth sense” or the ability to feel and see things that most people can’t. The test didn’t just ask questions about psychics. It also assessed superstition, belief in witchcraft, and spiritual belief, among other things. I just didn’t pay for the full report, so I got the part about psychics. While I found the results surprising — I thought I would fall more in the agnostic range than I did — apparently I am not alone. Many polling organizations occasionally conduct polls about paranormal experience and paranormal belief and achieve with varying results. Some polls show as high as 90% of Americans say they have either experienced the paranormal or believe in it. One of the problems in psycho-

logically assessing the paranormal is in reaching a definition of the word paranormal. The Toyback and Milford Paranormal Belief Scale (1983) was long considered the gold standard in assessing paranormal beliefs for research purposes; however, in recent years, it has come under fire from other professionals who feel it is not an accurate assessment of belief. So other scales have sprung up that take into account the various factors of paranormal belief. Does Research Focus Skew Results? With all of the assessments of paranormal belief in circulation, it appears that results are all over the map. No repeat pattern of personality traits and tendencies show up in paranormal belief assessments, which has led some psychologists to speculate that whatever the focus of the study is may actually skew the results in the direction of the study. As William Watt once said, “Do not put your faith in what statistics say until you have carefully considered what they do not say.” It is a well-known fact that statistics can be massaged to point to whatever result one would like them to point to. While there is a place in science for calculating averages and analyzing results, statistics are often

At Paranormal Underground, our mission is to publish the highest-quality e-Magazine for our readers. We strive to keep you updated on news from the paranormal world, as well as tackle the topics that most interest paranormal enthusiasts, researchers, and investigators. We hope you’ll find our publication entertaining and informative. 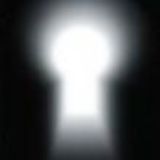