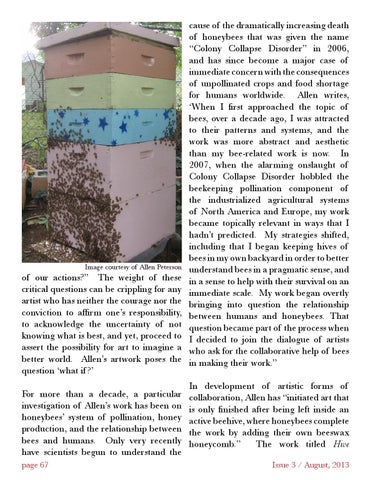 of our actions?” The weight of these critical questions can be crippling for any artist who has neither the courage nor the conviction to affirm one’s responsibility, to acknowledge the uncertainty of not knowing what is best, and yet, proceed to assert the possibility for art to imagine a better world. Allen’s artwork poses the question ‘what if ?’ For more than a decade, a particular investigation of Allen’s work has been on honeybees’ system of pollination, honey production, and the relationship between bees and humans. Only very recently have scientists begun to understand the page 67

cause of the dramatically increasing death of honeybees that was given the name “Colony Collapse Disorder” in 2006, and has since become a major case of immediate concern with the consequences of unpollinated crops and food shortage for humans worldwide. Allen writes, ‘When I first approached the topic of bees, over a decade ago, I was attracted to their patterns and systems, and the work was more abstract and aesthetic than my bee-related work is now. In 2007, when the alarming onslaught of Colony Collapse Disorder hobbled the beekeeping pollination component of the industrialized agricultural systems of North America and Europe, my work became topically relevant in ways that I hadn’t predicted. My strategies shifted, including that I began keeping hives of bees in my own backyard in order to better understand bees in a pragmatic sense, and in a sense to help with their survival on an immediate scale. My work began overtly bringing into question the relationship between humans and honeybees. That question became part of the process when I decided to join the dialogue of artists who ask for the collaborative help of bees in making their work.” In development of artistic forms of collaboration, Allen has “initiated art that is only finished after being left inside an active beehive, where honeybees complete the work by adding their own beeswax honeycomb.” The work titled Hive Issue 3 / August, 2013

Issue 3 of Paprika Southern, the online magazine for art and style with a southern twist. Visit us at www.paprikasouthern.com. 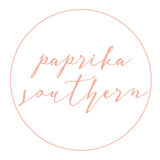