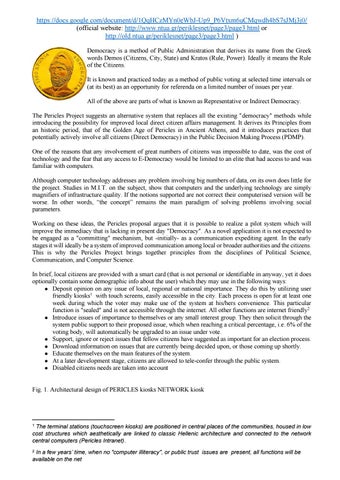 https://docs.google.com/document/d/1QqHCzMYn0eWbJ-Up9_P6Vtxm6uCMqwdh4bS7sJMj3j0/ (official website: http://www.ntua.gr/periklesnet/page3/page3.html or http://old.ntua.gr/periklesnet/page3/page3.html ) Democracy is a method of Public Administration that derives its name from the Greek words Demos (Citizens, City, State) and Kratos (Rule, Power). Ideally it means the Rule of the Citizens. It is known and practiced today as a method of public voting at selected time intervals or (at its best) as an opportunity for referenda on a limited number of issues per year. All of the above are parts of what is known as Representative or Indirect Democracy. The Pericles Project suggests an alternative system that replaces all the existing "democracy" methods while introducing the possibility for improved local direct citizen affairs management. It derives its Principles from an historic period, that of the Golden Age of Pericles in Ancient Athens, and it introduces practices that potentially actively involve all citizens (Direct Democracy) in the Public Decision Making Process (PDMP). One of the reasons that any involvement of great numbers of citizens was impossible to date, was the cost of technology and the fear that any access to E-Democracy would be limited to an elite that had access to and was familiar with computers. Although computer technology addresses any problem involving big numbers of data, on its own does little for the project. Studies in M.I.T. on the subject, show that computers and the underlying technology are simply magnifiers of infrastructure quality. If the notions supported are not correct their computerised version will be worse. In other words, “the concept” remains the main paradigm of solving problems involving social parameters. Working on these ideas, the Pericles proposal argues that it is possible to realize a pilot system which will improve the immediacy that is lacking in present day "Democracy". As a novel application it is not expected to be engaged as a "committing" mechanism, but -initially- as a communication expediting agent. In the early stages it will ideally be a system of improved communication among local or broader authorities and the citizens. This is why the Pericles Project brings together principles from the disciplines of Political Science, Communication, and Computer Science. In brief, local citizens are provided with a smart card (that is not personal or identifiable in anyway, yet it does optionally contain some demographic info about the user) which they may use in the following ways: ● Deposit opinion on any issue of local, regional or national importance. They do this by utilizing user friendly kiosks1 with touch screens, easily accessible in the city. Each process is open for at least one week during which the voter may make use of the system at his/hers convenience. This particular function is "sealed" and is not accessible through the internet. All other functions are internet friendly2 ● Introduce issues of importance to themselves or any small interest group. They then solicit through the system public support to their proposed issue, which when reaching a critical percentage, i.e. 6% of the voting body, will automatically be upgraded to an issue under vote. ● Support, ignore or reject issues that fellow citizens have suggested as important for an election process. ● Download information on issues that are currently being decided upon, or those coming up shortly. ● Educate themselves on the main features of the system. ● At a later development stage, citizens are allowed to tele-confer through the public system. ● Disabled citizens needs are taken into account

The terminal stations (touchscreen kiosks) are positioned in central places of the communities, housed in low cost structures which aesthetically are linked to classic Hellenic architecture and connected to the network central computers (Pericles Intranet). In a few years’ time, when no "computer illiteracy", or public trust issues are present, all functions will be available on the net 2

The following paragraphs briefly describe the main features and functions of the system in an application chronological order (specific example refers to a small city which is later to become a member of the broader network. Most of the following entries chronologically overlap): ● System Installed and Tested ● System citizen-education actions commence ● Local authority officials trained ● Local "constitution" of system finalized -according to system parameters- and made public. ● Local system information campaign commences. Call for citizens to get their cards. ● City council selects a number of initial issues. ● Supporters and opponents of initial issues are informed and provided with the fundamental means to author their views on the Pericles Citizen Information Subsystem (both on system network and the internet) ● Citizens consult the system on the issues on which they are called to decide in i.e. 2 weeks time. They do so over the net while those with insufficient means or skills do so in the public kiosks. ● Citizens vote on the above issues. ● Citizens -at any time period- introduce their own issues and seek support ● Citizens -at any time period- decide on whether other citizen issues should be part of a later election process / referendum ● Voting Period closes at a predetermined date. The electronic "ballot box" opens at the presence of reps of the supporters of the issues involved, the local authorities and the System Auditor. ● The results are made public and forwarded to the local executive bodies which are bounded by system basic choice parameters referring to the degree of commitment or simple consultation value of the process. ● The results are further interpreted on the basis of the demographic information that was optionally provided by the voters during the voter's "registration" to the system. That info has been "registered" in their cards and allows for such a process. The Project consists of the following subsystems: The Democracy Station Network (DSN) consists of the sealed system of linked hardware that makes access possible, located in public places. The E-Pericles System is the network that provides for all kinds of Internet usage. The Pericles.net subsystem is the high security sealed software that handles the voting process. The Aspasia.net subsystem is the one availing information to all citizens on issues before and during any edemocratic process. The Kleisthenis.net subsystem is the public teleconference carrier. The proposed experimental system of direct democracy has these goals: ● The study of a prototype model of authority-citizen communication, aided by technology. ● To study and apply methods for citizens incremental education to the notions of direct democracy. ● To provide a prototype concept of opinion polling, where the people are part of the query creation mechanism. Possible outcomes of this implementation can be new concepts concerning public decision making, as for example the notion of “fractional vote”3.

Individual vote is weighted according to different criteria. For example a woman’s vote may count as 1.3 a man’s vote in an abortion ballot. This notion could be very useful in marketing research, as well. 3 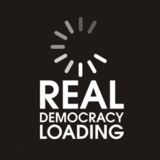 Pericles Network is a way of implementing (Direct) Democracy which was developed many years ago in "National Technical University of Athens"...

Pericles Network is a way of implementing (Direct) Democracy which was developed many years ago in "National Technical University of Athens"...