English version a project for creative thinking and philosophy 2014 final 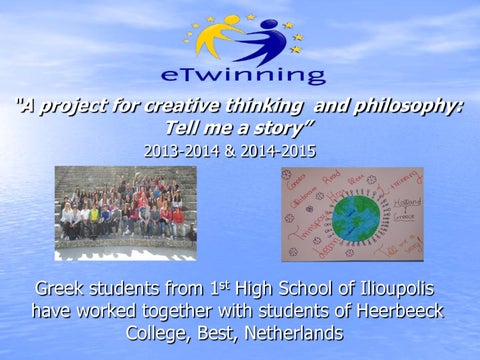 Greek students from 1st High School of Ilioupolis have worked together with students of Heerbeeck College, Best, Netherlands

In a digital classroom, twinspace, they have created their profiles and they have shared ice breaking activities

Greek students have presented to the Dutch students the custom of â&amp;#x20AC;&amp;#x153;vassilopitaâ&amp;#x20AC;?, the new year cake and they have watched together a Christmas movie

We have worked with web 2.0 tools

Saturday the 29th of March 2014 Welcome of our Dutch friends El.Venizelos Airport

Tuesday the 1 st of April Work at 1st High School of Ilioupolis Presentations of Greek and Dutch myths. Watch The movie of Iliada

Wednesday the 2nd of April Tour of Marathon, Cape Sounion and the Temple of Poseidon

Enter to the Digital book:

The Royal Palace of Brussels

Pupils have practiced the English language They have improved their computational skills They have improved their communication and presentation skills Pupils and teachers have shared different and valuable aspects of the Greek and Dutch literature Greek students had the chance to visit and learn more about the European Union and the European Institutions. Teachers had the chance to share ideas and practice different educational techniques This collaboration was a unique experience for the local society

• Last but not least, the two parts have developed a strong friendship Visit: http://youtu.be/Z57y-AWmIrE https://www.youtube.com/watch?v=usTO9G4GI4I Public link to this TwinSpace: http://new-twinspace.etwinning.net/web/p98066

English version a project for creative thinking and philosophy 2014 final 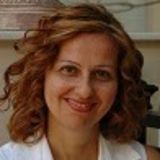