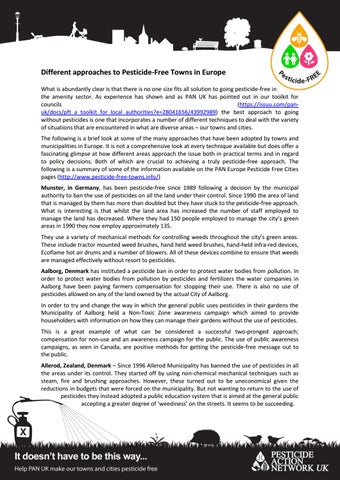 Different approaches to Pesticide-Free Towns in Europe What is abundantly clear is that there is no one size fits all solution to going pesticide-free in the amenity sector. As experience has shown and as PAN UK has pointed out in our toolkit for councils (https://issuu.com/panuk/docs/pft_a_toolkit_for_local_authorities?e=28041656/43992989) the best approach to going without pesticides is one that incorporates a number of different techniques to deal with the variety of situations that are encountered in what are diverse areas – our towns and cities. The following is a brief look at some of the many approaches that have been adopted by towns and municipalities in Europe. It is not a comprehensive look at every technique available but does offer a fascinating glimpse at how different areas approach the issue both in practical terms and in regard to policy decisions. Both of which are crucial to achieving a truly pesticide-free approach. The following is a summary of some of the information available on the PAN Europe Pesticide Free Cities pages (http://www.pesticide-free-towns.info/) Munster, in Germany, has been pesticide-free since 1989 following a decision by the municipal authority to ban the use of pesticides on all the land under their control. Since 1990 the area of land that is managed by them has more than doubled but they have stuck to the pesticide-free approach. What is interesting is that whilst the land area has increased the number of staff employed to manage the land has decreased. Where they had 150 people employed to manage the city’s green areas in 1990 they now employ approximately 135. They use a variety of mechanical methods for controlling weeds throughout the city’s green areas. These include tractor mounted weed brushes, hand held weed brushes, hand-held infra-red devices, Ecoflame hot air drums and a number of blowers. All of these devices combine to ensure that weeds are managed effectively without resort to pesticides. Aalborg, Denmark has instituted a pesticide ban in order to protect water bodies from pollution. In order to protect water bodies from pollution by pesticides and fertilizers the water companies in Aalborg have been paying farmers compensation for stopping their use. There is also no use of pesticides allowed on any of the land owned by the actual City of Aalborg. In order to try and change the way in which the general public uses pesticides in their gardens the Municipality of Aalborg held a Non-Toxic Zone awareness campaign which aimed to provide householders with information on how they can manage their gardens without the use of pesticides. This is a great example of what can be considered a successful two-pronged approach; compensation for non-use and an awareness campaign for the public. The use of public awareness campaigns, as seen in Canada, are positive methods for getting the pesticide-free message out to the public. Allerod, Zealand, Denmark – Since 1996 Allerod Municipality has banned the use of pesticides in all the areas under its control. They started off by using non-chemical mechanical techniques such as steam, fire and brushing approaches. However, these turned out to be uneconomical given the reductions in budgets that were forced on the municipality. But not wanting to return to the use of pesticides they instead adopted a public education system that is aimed at the general public accepting a greater degree of ‘weediness’ on the streets. It seems to be succeeding.

In what can be considered a novel approach to dealing with invasive species, whilst the Municipality does not use chemicals, they do still allow the general public to tackle species such as giant hogweed with herbicides. But once again they have adopted an educational approach to this by encouraging and showing the public that invasives can be tackled without resort to pesticides. This again highlights the value of public education and why it must play an important role in any pesticide-free approach. Bielefeld, Germany – passed a resolution in 1985 for pesticide-free green space management with the aim of protecting soil dwelling organisms and groundwater from the potentially harmful effects of pesticide use. In order to achieve this they have adopted a number of non-chemical approaches including hand weeding and very successful results using hot water treatment. Constance, Germany – has banned the use of herbicides many of its green spaces and has instead been using organic treatments such as Neem. There are exemptions for sports pitches where high quality turf is required. The town experimented with a number of systems including the Weed Badger (http://www.weedbadger.com/) and weed brushing. It has not been plain sailing as they have found that the public on Constance has a low tolerance for weeds and they have also experienced higher costs from using mechanical methods. But they are keen to stick to their pesticide-free commitment. Copenhagen, Denmark – has had a ban on the use of pesticides since the 1990’s. They are using a variety of different techniques to manage their green spaces effectively. These range from using mulches and other cover systems to suppress weed growth to more mechanical techniques such as flame and steam control. And, as in other successful pesticide-free areas, they have been actively encouraging the general public to accept and even enjoy the ‘weeds’ that are present. In what is a very forward thinking way of doing things they use mechanical means to control weeds and moss on sports fields. As long as weed growth in such areas does not present any health and safety risk to users a small amount of ‘weediness’ is tolerated if it has not been effectively dealt with by mechanical means. Eckernforde, Germany – has been pesticide-free for the last 25 years. They did have an exemption for treating giant hogweed but have since found that manual methods of removal are just as effective and so have now stopped the use of herbicides for that purpose. They have adopted a number of methods including the use of a sweeper fitted out with wire brushes to deal with weeds on paved areas. Furesoe, Denmark – since 1999 has stopped the use of all pesticides on green spaces, roads and pathways. Their approach has been to train a group of gardeners to become experts in weeds who can identify and differentiate between unwanted weeds and important local plant species that need protecting. In the beginning their hand weeding efforts had to be repeated up to six times per year but as the initiative has progressed the regularity of treatment has decreased. They have also used grazing animals to keep weeds and grasses under control. In all it is an initiative that is run jointly in cooperation amongst local citizens, farmers landowners and the municipality itself. This particular example has some very interesting features. Whilst at first the hand weeding schedule seems onerous once things start to get under control the need to weed also reduces. This presents good evidence that any pesticide-free regime needs time to settle in in order to work effectively. The example also nicely highlights

the need for cooperation if plans are going to succeed in the long run. Rennes, France – has been a pesticide-free town since for ten years. The decision to go pesticide-free was taken for two reasons; to protect the health of the citizens of Rennes and to protect drinking water sources. They have used a variety of different techniques. But one novel approach is allowing the citizens to be their own weed controllers. Pedestrians are a natural enemy for weeds, regular footfall helps to control weeds and whilst doing the job it also keeps costs down! Strasbourg, France – in 2008 the city of Strasbourg made the decision to go pesticide-free. Since then they have had to train council workers in the adoption of new techniques as well as encouraging the public to accept greater levels of ‘weediness’. But they believe that going pesticidefree will help to protect not just the health of the citizens but also of the workers that formally used pesticides for weed control. They have used mechanical brushes, flame weeders, steam and other mechanical methods. At the same time they have been working to develop planting and layout techniques for green spaces that help to deal with weeds naturally by the judicious use of mulches and plant selection. They also differentiate between different areas looking at how often weeds actually need to be controlled or whether they can just be left. Strasbourg represents a thoroughly joined up approach with the use of a variety of different techniques being adopted with success. Conclusions There are several important conclusions and lessons that can be taken from the above.  There is no silver bullet, a successful pesticide-free approach requires many different techniques in order to succeed  In order to succeed the municipality (council) needs to be fully behind the idea, willing to try different approaches and realise that this is a long term objective that cannot be realised over night  The support of the public is vital. Public awareness and education is a key element of any pesticide-free system What it also demonstrates is that where there is a will there is a way. Pesticide-Free is possible! 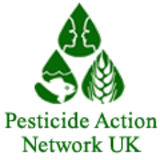 Different Approaches to Pesticides in Europe

Different Approaches to Pesticides in Europe