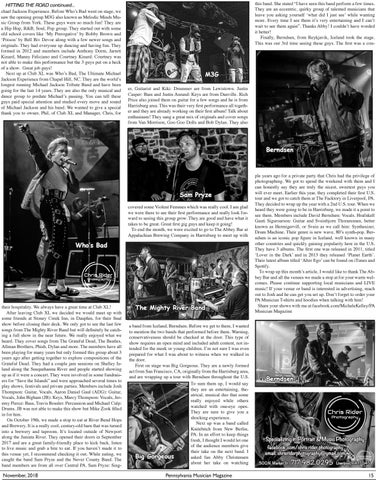 this band. She stated “I have seen this band perform a few times. They are an eccentric, quirky group of talented musicians that leave you asking yourself ‘what did I just see’ while wanting more. Every time I see them it’s very entertaining and I can’t wait to see them again”. Thanks Abby! I couldn’t have worded it better! Finally, Berndsen, from Reykjavik, Iceland took the stage. This was our 3rd time seeing these guys. The first was a cou-

chael Jackson Experience. Before Who’s Bad went on stage, we saw the opening group M3G also known as Melodic Minds Music Group from York. These guys were so much fun! They are a Hip Hop, R&B, Soul, Pop group. They started out with some old school covers like ‘My Prerogative’ by Bobby Brown and ‘Poison’ by Bell Biv Devoe along with a few newer songs and originals. They had everyone up dancing and having fun. They formed in 2012 and members include Anthony Dorm, Jarrett Kinard, Manny Feliciano and Courtney Kinard. Courtney was not able to make this performance but the 3 guys put on a heck of a show. Great job guys! Next up at Club XL was Who’s Bad, The Ultimate Michael Jackson Experience from Chapel Hill, NC. They are the world’s longest running Michael Jackson Tribute Band and have been going for the last 14 years. They are also the only musical and dance group to predate Michael’s passing. You can tell these guys paid special attention and studied every move and sound of Michael Jackson and his band. We wanted to give a special thank you to owner, Phil, of Club XL and Manager, Chris, for

M3G er, Guitarist and Kiki: Drummer are from Lewistown. Justin Casper: Bass and Justin Aurand: Keys are from Danville. Rich Price also joined them on guitar for a few songs and he is from Harrisburg area. This was their very first performance all together and they are already working on their first album! Talk about enthusiasm! They sang a great mix of originals and cover songs from Van Morrison, Goo Goo Dolls and Bob Dylan. They also

Sam Pryze covered some Violent Femmes which was really cool. I am glad we were there to see their first performance and really look forward to seeing this group grow. They are good and have what it takes to be great. Great first gig guys and keep it going! To end the month, we were excited to go to The Abbey Bar at Appalachian Brewing Company in Harrisburg to meet up with

their hospitality. We always have a great time at Club XL! After leaving Club XL we decided we would meet up with some friends at Stoney Creek Inn, in Dauphin, for their final show before closing their deck. We only got to see the last few songs from The Mighty River Band but will definitely be catching a full show in the near future. We really enjoyed what we heard. They cover songs from The Grateful Dead, The Beatles, Allman Brothers, Phish, Dylan and more. The members have all been playing for many years but only formed this group about 3 years ago after getting together to explore compositions of the Grateful Dead. They had a couple jam sessions on Shelley Island along the Susquehanna River and people started showing up as if it were a concert. They were involved in some fundraisers for “Save the Islands” and were approached several times to play shows, festivals and private parties. Members include Josh Thompson: Guitar, Vocals, Aaron Daniel Gaul (ADG): Guitar, Vocals, John Bigham (JB): Keys, Marcy Thompson: Vocals, Jeremy Pierce: Bass, Travis Bossler: Percussion and Michael Culp: Drums. JB was not able to make this show but Mike Zook filled in for him. On October 19th, we made a stop to eat at River Bend Hops and Brewery. It is a really cool, century-old barn that was turned into a brewery and taproom. It’s located outside of Newport along the Juniata River. They opened their doors in September 2017 and are a great family-friendly place to kick back, listen to live music and grab a bite to eat. If you haven’t made it to this venue yet, I recommend checking it out. While eating, we caught the band Sam Pryze and the Never County Band. The band members are from all over Central PA. Sam Pryze: Sing-

The Mighty River Band a band from Iceland, Berndsen. Before we get to them, I wanted to mention the two bands that performed before them. Warning, conservativeness should be checked at the door. This type of show requires an open mind and included adult content, not intended for the meek or young children. I’m not sure I was even prepared for what I was about to witness when we walked in the door. First on stage was Big Gorgeous. They are a newly formed act from San Francisco, CA, originally from the Harrisburg area, and are wrapping up a tour with Berndsen throughout the U.S. To sum them up, I would say they are an entertaining, theatrical, musical duo that some really enjoyed while others watched with one-eye open. They are sure to give you a shocking experience. Next up was a band called Knitebitch from New Berlin, PA. In an effort to keep things fresh, I thought I would let one of the audience members give their take on the next band. I Big Gorgeous asked fan Abby Christensen about her take on watching

ple years ago for a private party that Chris had the privilege of photographing. We got to spend the weekend with them and I can honestly say they are truly the nicest, sweetest guys you will ever meet. Earlier this year, they completed their first U.S. tour and we got to catch them at The Facktory in Liverpool, PA. They decided to wrap up the year with a 2nd U.S. tour. When we heard they were going to be in Harrisburg, we made it a point to see them. Members include David Berndsen: Vocals. Hrafnkell Gauti Siguroarson: Guitar and Sveinbjorn Thorarensen, better known as Hermigervill, or Svein as we call him: Synthesizer, Drum Machine. Their genre is new wave, 80’s synth-pop. Berndsen is an iconic pop figure in Iceland, well known in many other countries and quickly gaining popularity here in the U.S. They have 3 albums. The first one was released in 2011, titled ‘Lover in the Dark’ and in 2013 they released ‘Planet Earth’. Their latest album titled ‘Alter Ego’ can be found on iTunes and Spotify. To wrap up this month’s article, I would like to thank The Abbey Bar and all the venues we made a stop at for your warm welcomes. Please continue supporting local musicians and LIVE music! If your venue or band is interested in advertising, reach out to Josh and he can get you set up. Don’t forget to order your PA Musician T-shirts and hoodies when talking with him! Share your shows with me at facebook.com/MicheleKelley/PA Musician Magazine The PA Musician Magazine is a FREE Publication distributed throughout Pennsylvania. We are the magazine for not only the people who make mus...

The PA Musician Magazine is a FREE Publication distributed throughout Pennsylvania. We are the magazine for not only the people who make mus...