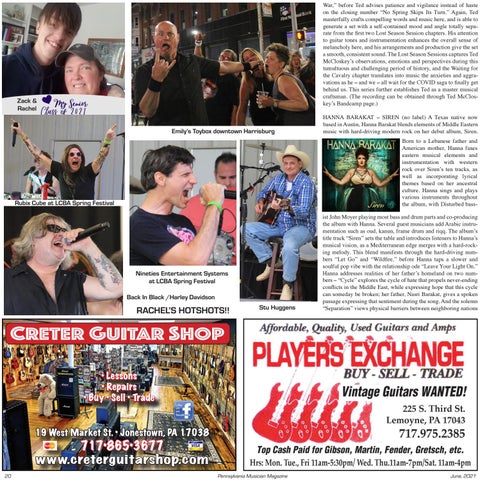 War,” before Ted advises patience and vigilance instead of haste on the closing number “No Spring Skips Its Turn.” Again, Ted masterfully crafts compelling words and music here, and is able to generate a set with a self-contained mood and angle totally separate from the first two Lost Season Session chapters. His attention to guitar tones and instrumentation enhances the overall sense of melancholy here, and his arrangements and production give the set a smooth, consistent sound. The Lost Season Sessions captures Ted McCloskey’s observations, emotions and perspectives during this tumultuous and challenging period of history, and the Waiting for the Cavalry chapter translates into music the anxieties and aggravations as he – and we – all wait for the COVID saga to finally get behind us. This series further establishes Ted as a master musical craftsman. (The recording can be obtained through Ted McCloskey’s Bandcamp page.)

HANNA BARAKAT – SIREN  (no label)  A Texas native now based in Austin, Hanna Barakat blends elements of Middle Eastern music with hard-driving modern rock on her debut album, Siren. Born to a Lebanese father and American mother, Hanna fuses eastern musical elements and instrumentation with western rock over Siren’s ten tracks, as well as incorporating lyrical themes based on her ancestral culture. Hanna sings and plays various instruments throughout the album, with Disturbed bass-

ist John Moyer playing most bass and drum parts and co-producing the album with Hanna. Several guest musicians add Arabic instrumentation such as oud, kanun, frame drum and riqq. The album’s title track “Siren” sets the table and introduces listeners to Hanna’s musical vision, as a Mediterranean edge merges with a hard-rocking melody. This blend manifests through the hard-driving numbers “Let Go” and “Wildfire,” before Hanna taps a slower and soulful pop vibe with the relationship ode “Leave Your Light On.” Hanna addresses realities of her father’s homeland on two numbers – “Cycle” explores the cycle of hate that propels never-ending conflicts in the Middle East, while expressing hope that this cycle can someday be broken; her father, Nasri Barakat, gives a spoken passage expressing that sentiment during the song. And the solemn “Separation” views physical barriers between neighboring nations The Pennsylvania Musician Magazine is a FREE publication distributed throughout the state of PA. We are THE magazine for not only people who...

The Pennsylvania Musician Magazine is a FREE publication distributed throughout the state of PA. We are THE magazine for not only people who...