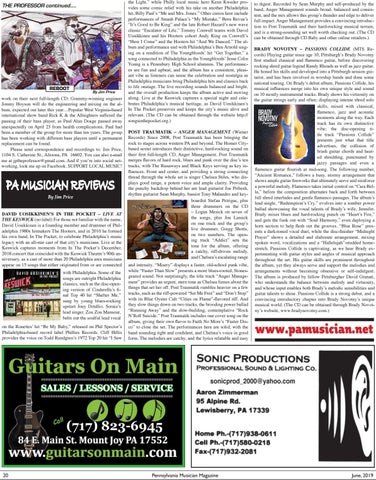 work on their next full-length CD; Grammy-winning engineer Jimmy Hoyson will do the engineering and mixing on the album, expected out later this year…Popular West Virginia-based international show band Rick K &amp; the Allnighters suffered the passing of their bass player, as Paul Alan Doege passed away unexpectedly on April 23 from health complications. Paul had been a member of the group for more than ten years. The group has been working with different bass players until a permanent replacement can be found. Please send correspondence and recordings to: Jim Price, 1104 S. Catherine St., Altoona, PA 16602. You can also e-mail me at jptheprofessor@gmail.com. And if you’re into social networking, look me up on Facebook. SUPPORT LOCAL MUSIC!

DAVID UOSIKKINEN’S IN THE POCKET – LIVE AT THE KESWICK (no label) For those not familiar with the name, David Uosikkinen is a founding member and drummer of Philadelphia 1980s hitmakers The Hooters, and in 2010 he formed his own band, In The Pocket, to celebrate Philadelphia’s music legacy with an all-star cast of that city’s musicians. Live at the Keswick captures moments from In The Pocket’s December, 2018 concert that coincided with the Keswick Theatre’s 90th anniversary, as a cast of more than 20 Philadelphia area musicians appear on 15 songs that either originated from or are connected with Philadelphia. Some of the songs are outright Philadelphia classics, such as the disc-opening version of Cinderella’s final Top 40 hit “Shelter Me,” sung by young blues-rocking upstart Joey Ditullio. Soraia’s lead singer, Zou Zou Mansour, belts out the soulful lead vocal

the Light,” while Philly local music hero Kenn Kweder provides some comic relief with his take on another Philadelphia hit, Billy Paul’s “Me and Mrs. Jones.” Other curios here include performances of Smash Palace’s “My Mistake,” Beru Revue’s “It’s Good to Be King” and the late Robert Hazard’s new wave classic “Escalator of Life.” Tommy Conwell teams with David Uosikkinen and his Hooters cohort Andy King on Conwell’s “Here I Come” and the Hooters hit “And We Danced.” The album and performance end with Philadelphia’s Ben Arnold singing on a rendition of The Youngbloods’ hit “Get Together,” a song connected to Philadelphia as the Youngbloods’ Jesse Colin Young is a Pennsbury High School alumnus. The performances are fun and upbeat, and the album has a consistent, pleasant vibe as listeners can sense the celebration and nostalgia as Philadelphia musicians bring Philadelphia hits and classics back to life onstage. The live recording sounds balanced and bright, and the overall production keeps the album active and moving along. Live at the Keswick captures a special night and celebrates Philadelphia’s musical heritage, as David Uosikkinen’s In The Pocket preserves and keeps the city’s music alive and relevant. (The CD can be obtained through the website http:// songsinthepocket.org.) POST TRAUMATIK – ANGER MANAGEMENT (Wiener Records) Since 2008, Post Traumatik has been bringing the rock to stages across western PA and beyond. The Homer Citybased sextet introduces their distinctive, hard-rocking sound on their first full-length CD, Anger Management. Post Traumatik merges flavors of hard rock, blues and punk over the disc’s ten tracks, with The Runaways and Black Keys serving as key influences. Front and center, and providing a strong connecting thread through the whole set is singer Chelsea Stiles, who displays good range, a potent voice and ample clarity. Providing the punchy backdrop behind her are lead guitarist Joe Pribesh, rhythm guitarist Sean Murphy, bassist Tony Malandro and keyboardist Stefan Petrigac, plus three drummers on the CD – Logan Mesick on seven of the songs, plus Joe Lassick on one track and the group’s live drummer, Gregg Shotts, on two numbers. The opening track “Addict” sets the tone for the album, offering a catchy, riff-driven melody, and Chelsea’s escalating range

and intensity. “Misery” displays a faster, old-school punk vibe, while “Faster Than Slow” presents a more blues-rooted, Stonesgeared sound. Not surprisingly, the title track “Anger Management” provides an urgent, stern tone as Chelsea fumes about the things that set her off. Post Traumatik rumbles heavier on a few tracks, such as the riff-powered “Set Me Free” and “Don’t Stop” with its Blue Oyster Cult “Cities on Flame”-flavored riff. And they slow things down on two tracks, the brooding power ballad “Running Away” and the slow-building, contemplative “Rock N’Roll Suicide.” Post Traumatik includes one cover song on the album, giving their own flavor to Faith No More’s “Faster Disco” to close the set. The performances here are solid, with the band sounding tight and confident, and Chelsea’s voice in good form. The melodies are catchy, and the lyrics relatable and easy

to digest. Recorded by Sean Murphy and self-produced by the band, Anger Management sounds broad, balanced and consistent, and the mix allows this group’s thunder and edge to deliver full impact. Anger Management provides a convincing introduction to Post Traumatik and their hard-rocking musical terrain, and is a strong-sounding set well worth checking out. (The CD can be obtained through CD Baby and other online retailers.) BRADY NOVOTNY – PASSIONS COLLIDE (MTS Records) Playing guitar since age 10, Pittsburgh’s Brady Novotny first studied classical and flamenco guitar, before discovering rocking shred guitar legend Randy Rhoads as well as jazz guitar. He honed his skills and developed into a Pittsburgh session guitarist, and has been involved in worship bands and done some national touring. On Brady’s debut album, Passions Collide, his musical influences merge into his own unique style and sound on 10 mostly instrumental tracks. Brady shows his virtuosity on the guitar strings early and often; displaying intense shred solo skills, mixed with classical, flamenco, jazz and acoustic moments along the way. Each track has its own distinctive vibe; the disc-opening title track “Passions Collide” presents just what that title advertises, the collision of brash guitar chords and heated shredding, punctuated by jazzy passages and even a flamenco guitar flourish at mid-song. The following number, “Ancient Romance,” follows a busy, stormy arrangement that shows ample guitar fireworks that ultimately serve and reinforce a powerful melody. Flamenco takes initial control on “Cara Bella,” before the composition alternates back and forth between full shred interludes and gentle flamenco passages. The album’s lead single, “Redemption’s Cry,” evolves into a somber power ballad showcasing the vocal talents of Brady’s wife, Jennifer. Brady mixes blues and hard-rocking punch on “Heart’s Fire,” and gets the funk out with “Soul Harmony,” even deploying a horn section to help flesh out the grooves. “Blue Rose” presents a dark-toned vocal duet, while the disc-finisher “Midnight Prayer” shows a detailed and elaborate arrangement, mixing spoken word, vocalizations and a “Hallelujah”-studded homestretch. Passions Collide is captivating, as we hear Brady experimenting with guitar styles and angles of musical approach throughout the set. His guitar skills are prominent throughout the album, yet they always serve and support the melodies and arrangements without becoming obsessive or self-indulgent. The album is produced by fellow Pittsburgher David Granati, who understands the balance between melody and virtuosity, and whose input enables both Brady’s melodic sensibilities and guitar talents to shine. Passions Collide is a strong debut, and a convincing introductory chapter into Brady Novotny’s unique musical world. (The CD can be obtained through Brady Novotny’s website, www.bradynovotny.com.)

The Pennsylvania Musician Magazine is a FREE Publication distributed throughout the state of PA. We are THE magazine for not only the people who MAKE music, but also for the people who LOVE music. We encourage our readers to get out and Support Local Music!