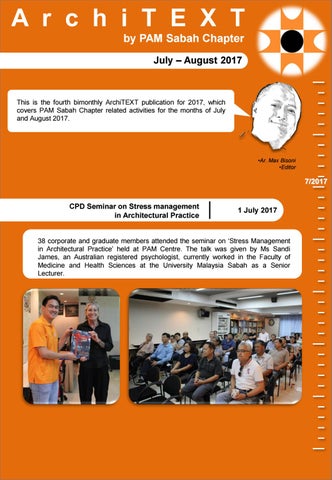 This is the fourth bimonthly ArchiTEXT publication for 2017, which covers PAM Sabah Chapter related activities for the months of July and August 2017.

38 corporate and graduate members attended the seminar on ‘Stress Management in Architectural Practice’ held at PAM Centre. The talk was given by Ms Sandi James, an Australian registered psychologist, currently worked in the Faculty of Medicine and Health Sciences at the University Malaysia Sabah as a Senior Lecturer.

The Networking Visit by IEM Sabah Branch to PAM Centre was attended by 9 Engineers and received by 9 Architects. The purpose of the visit is to strengthen the mutual cooperation and understanding between PAM and IEM. The visit also deliberated on the submission of plans by Architects and Engineers.

The Graduates Committee had organised a Raya Get-Together + Dialogue Session with the Chapter Chairman and CC members at Asia Rasa Karamunsing Capital.

A product presentation by Mapei Malaysia Sdn Bhd was held at the Le Meridien, Kota Kinabalu on 15th July 2017. The topic was “defects in waterproofing and tilling works in buildings - why they happen and how to prevent them”.

The Graduates Committee had invited Ar. Mohd Fuad Ahmad to conduct the Bomba UBBL tutorial and it was held for 2 days from Saturday to Sunday (15th to 16th July 2017).

Chairman, Ar. Arnold Kwan had led 6 committee members to a courtesy call to YB Datuk Seri Masidi Manjun and submitted a Memorandum to him. The memorandum proposals were : 1.PAM invited the Ministry of Tourism, Culture and Environment to be part of the celebration to boost tourism in conjunction with “Borneo Architecture Festival” (BAF 2018) which the theme is “Resort/Hotel”. 2.PAM sought the Ministry’s help to get permission from the government to adopt the former welfare department building that has been destroyed in a mysterious fire in 1992, as a gazetted heritage building. 3.To seek the State Cabinet’s approval to develop our own green rating tool for resort hotel in Sabah.

The event witnessed the installation of the new Sabah Chapter Chairman, Ar Arnold Kwan and the introduction of his new committee members. The dinner theme was “V” for VIVID.

6 out of 18 entries were shortlisted to enter into the final round of the contest to construct a live size kiosk on 7 October 2017. RM2,000 incentives were given to each finalist to kick start their construction for the final stage of the kiosk design. A total sum of RM18,750 is available to be won by the 6 finalists.

Courtesy Call to the Minister of Local Government &amp; Housing 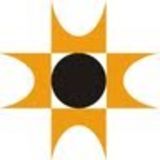