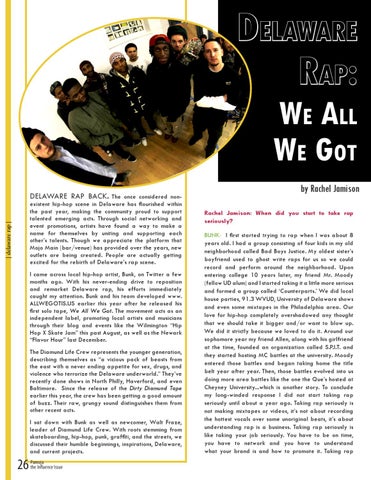 Delaware Rap: We All We Got

The once considered nonexistent hip-hop scene in Delaware has flourished within the past year, making the community proud to support talented emerging acts. Through social networking and event promotions, artists have found a way to make a name for themselves by uniting and supporting each other’s talents. Though we appreciate the platform that Mojo Main (bar/venue) has provided over the years, new outlets are being created. People are actually getting excited for the rebirth of Delaware’s rap scene. I came across local hip-hop artist, Bunk, on Twitter a few months ago. With his never-ending drive to reposition and remarket Delaware rap, his efforts immediately caught my attention. Bunk and his team developed www. ALLWEGOTIS.US earlier this year after he released his first solo tape, We All We Got. The movement acts as an independent label, promoting local artists and musicians through their blog and events like the Wilmington “Hip Hop X Skate Jam” this past August, as well as the Newark “Flavor Hour” last December. The Diamund Life Crew represents the younger generation, describing themselves as “a vicious pack of beasts from the east with a never ending appetite for sex, drugs, and violence who terrorize the Delaware underworld.” They’ve recently done shows in North Philly, Haverford, and even Baltimore. Since the release of the Dirty Diamund Tape earlier this year, the crew has been getting a good amount of buzz. Their raw, grungy sound distinguishes them from other recent acts. I sat down with Bunk as well as newcomer, Walt Fraze, leader of Diamund Life Crew. With roots stemming from skateboarding, hip-hop, punk, graffiti, and the streets, we discussed their humble beginnings, inspirations, Delaware, and current projects.

by Rachel Jamison Rachel Jamison: When did you start to take rap seriously? BUNK: I first started trying to rap when I was about 8 years old. I had a group consisting of four kids in my old neighborhood called Bad Boys Justice. My oldest sister’s boyfriend used to ghost write raps for us so we could record and perform around the neighborhood. Upon entering college 10 years later, my friend Mr. Moody (fellow UD alum) and I started taking it a little more serious and formed a group called ‘Counterparts.’ We did local house parties, 91.3 WVUD, University of Delaware shows and even some mixtapes in the Philadelphia area. Our love for hip-hop completely overshadowed any thought that we should take it bigger and/or want to blow up. We did it strictly because we loved to do it. Around our sophomore year my friend Allen, along with his girlfriend at the time, founded an organization called S.P.I.T. and they started hosting MC battles at the university. Moody entered those battles and began taking home the title belt year after year. Then, those battles evolved into us doing more area battles like the one the Que’s hosted at Cheyney University...which is another story. To conclude my long-winded response I did not start taking rap seriously until about a year ago. Taking rap seriously is not making mixtapes or videos, it’s not about recording the hottest vocals over some unoriginal beats, it’s about understanding rap is a business. Taking rap seriously is like taking your job seriously. You have to be on time, you have to network and you have to understand what your brand is and how to promote it. Taking rap 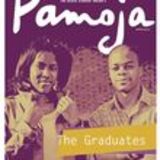 The Black Student Union at the University of Delaware presents Pamoja Magazine: The Influence Issue for the Spring 2012 term.

The Black Student Union at the University of Delaware presents Pamoja Magazine: The Influence Issue for the Spring 2012 term.