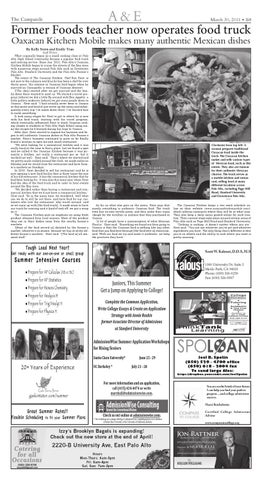 What originally began as a small cooking class at Palo Alto High School eventually became a popular food truck and catering service. Since Jan. 2011, Palo Alto’s Oaxacan Kitchen Mobile began to cruise the streets of the Bay Area with numerous stops around Palo Alto such as Downtown Palo Alto, Stanford University and the Palo Alto Farmer’s Market. The owner of The Oaxacan Kitchen, Chef Ron Kent, is not new to the culinary world as he has been a chef for over thirty years. His interest in Oaxacan food began when he married an Oaxaqueña (a woman of Oaxacan descent). “[The idea] started after we got married and the family down there wanted to meet us. We started a travel program [where] we did a little fly around with Bon Appétit, a little gallery endeavor [where] we got some people down to Oaxaca,” Kent said. “I had actually never been to Oaxaca at that point and kind of just wrote up the menu and subsequently every trip I’ve taken down there, I’ve learned how to make something.” It took many stages for Kent to get to where he is now with his food truck, starting with his travel program, which eventually influenced Kent to teach Oaxacan cooking classes to students at Palo Alto High School using many the recipes he’d learned during his trips to Oaxaca. After that, Kent started to expand his business and began to sell authentic Oaxacan dishes at Palo Alto Farmer’s market. Kent’s business continued to grow as he finally found a location to open his own small restaurant. “We were looking for a commercial kitchen and it was really hard at the time to find a place, but we found a spot and we called it the Oaxacan Kitchen because it was primarily a kitchen, not really a restaurant per se, but it worked out well,” Kent said. “That’s where we started and we pretty much cooked around the clock, we made moles on Monday and we would close the restaurant and have farmer’s markets on Sundays.” In 2010, Kent decided to sell his restaurant and he is now opening a new food facility that is three times the size of his old restaurant. It has the commercial kitchen that he had been looking for. It was also this same year when Kent had the idea of the food truck and to cater to local events around the Bay Area. “We decided rather than having a restaurant and commercial kitchen that we’d just have a commercial kitchen,” Kent said. “So in the mean time, we wondered, ‘well what can we do to still be out there, and have food for our customers who love the restaurant, who travel around,’ and so we came up with [the food truck]. It made sense to have our truck for catering and it kind of took off, we put a wrap on it.” The Oaxacan Kitchen puts an emphasis on using fresh produce obtained from local sources. Most of the produce they use in their dishes come from the nearby farmer’s markets. “[Most of the food served is] dictated by the farmer’s market, whatever’s in season, because we buy at seven different farmer’s markets,” Kent said. “[The food is] all seasonal stuff.”

Clockwise from top left: A woman prepares traditional Oaxacan food inside the truck. The Oaxacan Kitchen makes and sells various types of Mexican food, such as this entree. They also are famous for their authentic Mexican churros. The truck serves as a mobile kitchen and restaurant, selling food at many different locations across Palo Alto, including Page Mill Road, Stanford University and Downtown Palo Alto. As far as what else goes on the menu, Kent says that mostly everything is authentic Oaxacan food. The truck even has its own tortilla press, and they make their masa (dough for the tortillas) in molinos that they purchased in Oaxaca. “A lot of people have a misconception of what Mexican Food is,” Kent said. “Something we found out from going to Oaxaca is that the Oaxacan food is nothing like any other food that you find here because [the food here is] Americanized. With our food we try and make it authentic, we keep the practices they have.”

The Oaxacan Kitchen keeps a two week schedule online on their website (www.oaxacankitchenmobile.com/), which informs customers where they will be at what time. They also keep a daily menu posted online for each location. Their current stops take place around certain areas of Palo Alto such as Page Mill Road and Stanford University. “Cooking is cooking; it doesn’t matter where you are,” Kent said. “You can use whatever you’ve got and whatever ingredients you have. The only thing that’s different is that you’re on wheels and the ability to cook where you want is pretty amazing.”

You are on the brink of your future. I can help you find your path to purpose ...and college admissions success. Marci Reichelstein Certified College Admissions Advisor www.compasstocollege.org

Izzy’s Brooklyn Bagels is expanding! Check out the new store at the end of April!

By Isabel Benatar SPORTS See GUIDANCE, page A3 LIFESTYLES By Sophie Parker Staff Writer See DEBATE, page A3 See SERVICE, page A3 Savage can vouch for the Bakshi’s per- sistence. “She put many hours of work in doing practice debates, research and working with her coaches,” Savage said. “Her work See RAIL, page A3 Memes, specifically Paly Memes, have taken the school by storm. Students enjoy having a good laugh about others’ experi- ences, good or bad, here at Palo Alto High School. More from The Paly Voice