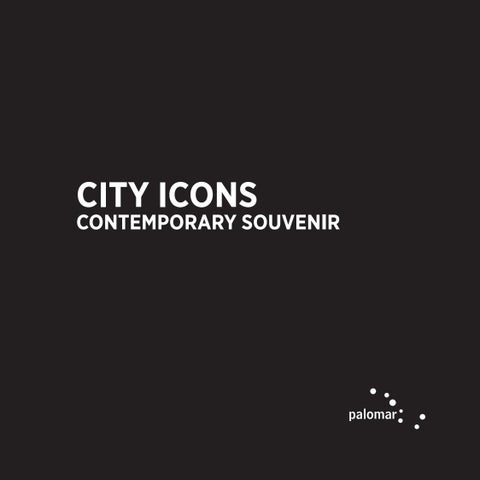 index the project the curator the designer the collection Palomar

the project by MARCO SAMMICHELI

The urban horizon is a work in progress A series of architectures of as many world cities has been interpreted by designer Paolo Dell’Elce and enclosed in transparent hemispheres between water and artificial snow. This aseptic description defines a category of objects that is as ancient as it is popular. The glass globe containing snow, also called “snowball” in English, is the archetype of the souvenir, a synthesis of memories and images that can be traced back to the nineteenth century. Its first certain appearance dates back to the Paris Universal Exposition of 1878. A hundred and forty years later, the Italian firm Palomar presents a collection that emanates from that tradition but thanks to Dell’Elce’s creative action becomes rich in interpretive dimensions, an object open to emotional completion by the purchaser. ·5

City Icons is collection of relational objects London, Berlin, Tokyo, Milan, New York and the other icons of the collection emerge as primary shapes, as a geometric mystery ready to be deciphered and connected to the part of the city they evoke and to the memory or image they celebrate. The icons’ black color encourages abstraction and eliminates the immediate recognizability that extinguishes imagination and ages this kind of souvenir quickly. Italian company Palomar presents a collection which generates stories, an inexhaustible function that welcomes and absorbs any traveller’s experience. The essential icon chosen by the designer to synthesize the city acquires a new life between water and snow, both quiet and restless, detached and romantic.

The collectible souvenir: romantic refuge and memory activator Paolo Dell’Elce gambles on a type of souvenir that is often relegated to the dubious territories of kitsch. He’s not afraid of it and tames it with a personal trait. A design approach I wouldn’t clas6·

sify as minimal but rather as an interpretation in scale and tonal definition of the architecture chosen for this collection. By placing the black shapes of the (twelve) cities in the snowy dome, the designer breaks away from the tradition of the multicolor globe and ignores the mechanical gesture of shaking it. He holds to the tradition of snow without being subservient to it.

The haven city and the architecture of feelings The urban landscape is a recurrent element in Palomar’s history. This time however it becomes table architecture, travel sculpture, metaphysical furnishing. Paolo Dell’Elce has a personal approach to the inclination, common to many designers, to work on the scale of buildings and transform them into objects and jewels. These are clues to the imaginary that activate a connection to the city and generate a form of attachment that is personal and gestural, possessive and “walkable”. The digital technology used for this collection is an element that determines its aesthetic only to a small extent . Here technology is much more, an instrument to connect urban dimension and domestic contemplation. ·7

The shape of mystery: design and metropolitan identity The designer interprets Palomar’s sophisticated simplicity with an approach that rewards reduction, plays with mimesis and invites gesture. The designer offers a key to interpret and a gateway to the city’s complexity. He does it with an object that has a traditional outer shell and a contemporary core. With City Icons the designer affirms his authorial freedom. Through the purity of his shapes his objective is to increase the degree of invisible reality through the the snow filled glass ball. Here the outline of the building he is representing holds the mystery of darkness, the fascination of night and the absence of definition that is typical of dreams.

the curator Marco Sammicheli (Italy, 1979) is an indipendent curator, a design professional and contract professor at the School of Design of Politecnico di Milano. After graduating in Communication Science in Siena and specializing in History of Design at the Bauhaus in Weimar, in 2009 he earned a doctorate in design and technology for the development of cultural heritage at Politecnico di Milano. He wrote monographs on architects Zaha Hadid, Mario Bellini and essays on catalogs for many institutions and museums. After being editor in chief of “Zero” magazine he has been design editor for “Abitare” from 2014 to 2017. He’s columnist for La Domenica – Il Sole 24 Ore and Vogue. In 2014 he participated in the International Architecture Exhibition in Venice Biennale and since 2012 he curated several projects for Museo del Novecento in Milan, Triennale di Milano, Assab One, max museo, Massimo Minini gallery and Camp Design gallery. Adviser of Medaglia d’Oro all’Architettura Italiana, he promoted a residency program for designers at the Italian Embassy in Copenhagen (2016- on going). He’s member of the board of Fondazione Massimo e Sonia Cirulli (Bologna/New York) and founder of Mostro – graphic design camp, a festival devoted to graphic arts and visual communication. · 11

the designer Paolo Dell’Elce (Italy, 1983) is an Industrial designer based in Milano, Italy specialized in furniture, lighting and product design. He studied design at Politecnico di Milano (IT) and at the Oslo school of Architecture and Design (NO). His work has been published internationally, has received design awards including a honorable mention for 2014 Compasso d’Oro and the Red Dot Award: Product Design, and has been exhibited in prestigious institutions as Triennale di Milano, Museo Poldi Pezzoli in Milan, Museo dell’Ara Pacis in Rome, Kunstraum Muenchen in Munich. DAMN°, a bimonthly magazine on contemporary culture wrote about his work: “His objects perform a rare balancing act: they display clear, precise forms without relinquishing the essential sensual component.” From 2011 to 2014 he has been Design Director of historic Italian company Danese Milano. From 2015 he leads the Furniture design team at David Chipperfield Architects. · 13

Palomar We design radical innovation Palomar is a design company founded in Florence, Italy in 2001. The products we design and manufacture — a collection of nomadic objects — are radically innovative for the new meanings they aspire to bring to our everyday life and experience. Through a research that can be described as “post-digital”, every project designed by Palomar represents a sort of countermelody to the over-whelming digital technology mainstream; a way of saying that new physical and analogic objects can coexist with the digital technology and its presumed imperatives, enriching our experience with a more human, more ironic and more attractive dimension.

A series of architectures of as many world cities has been interpreted by designer Paolo Dell’Elce and enclosed in transparent hemispheres between water and artificial snow. This aseptic description defines a category of objects that is as ancient as it is popular. The glass globe containing snow, also called “snowball” in English, is the archetype of the souvenir, a synthesis of memories and images that can be traced back to the nineteenth century. Its first certain appearance dates back to the Paris Universal Exposition of 1878. A hundred and forty years later, the Italian firm Palomar presents a collection that emanates from that tradition.