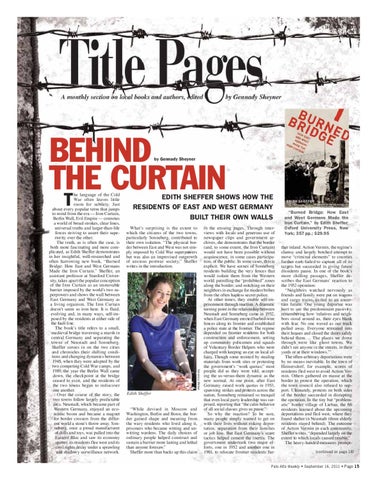 BEHIND THE CURTAIN T by Gennady Sheyner

What’s surprising is the extent to which the citizens of the two towns, particularly Sonneberg, contributed to their own isolation. “The physical border between East and West was not simply imposed by Cold War superpowers but was also an improvised outgrowth of anxious postwar society,” Sheffer writes in the introduction.

he language of the Cold War often leaves little room for subtlety. Just about every popular term that jumps to mind from the era — Iron Curtain, Berlin Wall, Evil Empire — connotes a world of broad strokes, clear lines, universal truths and larger-than-life forces striving to assert their superiority over the other. The truth, as is often the case, is both more fascinating and more complicated, as Edith Sheffer demonstrates in her insightful, well-researched and often harrowing new book, “Burned Bridge: How East and West Germans Made the Iron Curtain.” Sheffer, an assistant professor at Stanford University, takes apart the popular conception of the Iron Curtain as an immovable barrier imposed by the world’s two superpowers and shows the wall between East Germany and West Germany as a living organism. The Iron Curtain doesn’t seem so iron here. It is fluid, evolving and, in many ways, self-imposed by the residents at either side of the fault line. The book’s title refers to a small, medieval bridge traversing a marsh in central Germany and separating the towns of Neustadt and Sonneberg. Sheffer zeroes in on the two cities and chronicles their shifting conditions and changing dynamics between 1945, when they were adopted by the two competing Cold War camps, and 1989, the year the Berlin Wall came down, the checkpoint at the bridge ceased to exist, and the residents of the two towns began to rediscover one another. Over the course of the story, the two towns follow largely predictable arcs. Neustadt, which became part of Western Germany, enjoyed an economic boom and became a magnet for border crossers from the different world a stone’s throw away. Sonneberg, once a proud manufacturer of dolls and toys, was pulled into the Eastern Bloc and saw its economy sputter, its residents flee west and its civil rights decay under a sprawling and shadowy surveillance network.

“While devised in Moscow and Washington, Berlin and Bonn, the border gained shape and meaning from the wary residents who lived along it, prisoners who became witting and unwitting wardens. The daily choices of ordinary people helped construct and sustain a barrier more lasting and lethal than anyone foresaw.” Sheffer more than backs up this claim

in the ensuing pages. Through interviews with locals and generous use of newspaper clips and government archives, she demonstrates that the border (and, to some extent, the Iron Curtain) would not have been possible without acquiescence, in some cases participation, of the public. In some cases, this is explicit. We have scenes of Sonneberg residents building the very fences that would isolate them from the Western world; patrolling the “prohibited” zones along the border; and snitching on their neighbors in exchange for modest bribes from the often hapless secret police. At other times, they enable self-imprisonment through inaction. A dramatic turning point in the relationship between Neustadt and Sonneberg came in 1952, when East Germany erected barbed-wire fences along its frontier and established a police state at the frontier. The regime depended on frontier residents for both construction and enforcement, setting up community policemen and squads of Voluntary Border Helpers who were charged with keeping an eye on local affairs. Though some resisted by stealing materials from work sites or protesting the government’s “work quotas,” most people did as they were told, accepting the us-versus-them dynamic as the new normal. At one point, after East Germany raised work quotas in 1953, spawning strikes and protests across the nation, Sonneberg remained so tranquil that even local party leadership was surprised, reporting that “the calm behavior of all social classes gives us pause.” So why the inaction? To be sure, many people simply wanted to get on with their lives without risking deportation, separation from their families or job loss. But East Germany’s scare tactics helped cement the inertia. The government undertook two major efforts, one in 1952 and another one in 1961, to relocate frontier residents fur-

“Burned Bridge: How East and West Germans Made the Iron Curtain,” by Edith Sheffer; Oxford University Press, New York; 357 pp.; $29.95 ther inland. Action Vermin, the regime’s clumsy and largely botched attempt to move “criminal elements” to counties further east, failed to capture all of its targets but succeeded in giving future dissidents pause. In one of the book’s more chilling passages, Sheffer describes the East Germans’ reaction to the 1952 operation: “Neighbors watched nervously as friends and family were put on wagons and cargo trains, exiled to an uncertain future. One young deportee was hurt to see the predominant passivity, remembering how ‘relatives and neighbors stood around us, their eyes blank with fear. No one waved as our truck pulled away. Everyone retreated into their houses and closed the doors safely behind them. ... The places we drove through were like ghost towns. We didn’t see anyone in the streets, in their yards or at their windows.’” The often-arbitrary deportations were by no means inevitable. In the town of Heinersdorf, for example, scores of residents fled west to avoid Action Vermin. Others gathered en masse at the border to protest the operation, which the town council also refused to support. Ultimately, protests on both sides of the border succeeded in disrupting the operation. In the tiny but “problematic” border village of Liebau, the 66 residents learned about the upcoming deportations and fled west, where they found shelter in Neustadt (three elderly residents stayed behind). The outcome of Action Vermin in each community, Sheffer writes, “depended largely on the extent to which locals caused trouble.” The heavy-handed measures prompt(continued on page 18)

Section 1 of the september 16, 2011 edition of the Palo Alto Weekly 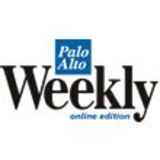