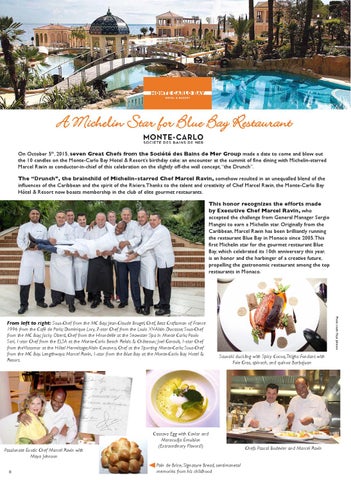 A Michelin Star for Blue Bay Restaurant On October 5th, 2015, seven Great Chefs from the Société des Bains de Mer Group made a date to come and blow out the 10 candles on the Monte-Carlo Bay Hotel & Resort’s birthday cake: an encounter at the summit of fine dining with Michelin-starred Marcel Ravin as conductor-in-chief of this celebration on the slightly off-the wall concept, “the Drunch”. The “Drunch”, the brainchild of Michelin-starred Chef Marcel Ravin, somehow resulted in an unequalled blend of the influences of the Caribbean and the spirit of the Riviera. Thanks to the talent and creativity of Chef Marcel Ravin, the Monte-Carlo Bay Hôtel & Resort now boasts membership in the club of elite gourmet restaurants. This honor recognizes the efforts made by Executive Chef Marcel Ravin, who accepted the challenge from General Manager Sergio Mangini to earn a Michelin star. Originally from the Caribbean, Marcel Ravin has been brilliantly running the restaurant Blue Bay in Monaco since 2005. This first Michelin star for the gourmet restaurant Blue Bay, which celebrated its 10th anniversary this year, is an honor and the harbinger of a creative future, propelling the gastronomic restaurant among the top restaurants in Monaco.