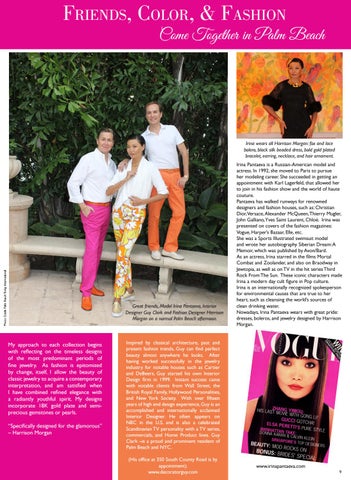 My approach to each collection begins with reflecting on the timeless designs of the most predominant periods of fine jewelry. As fashion is epitomized by change, itself, I allow the beauty of classic jewelry to acquire a contemporary interpretation, and am satisfied when I have combined refined elegance with a radiantly youthful spirit. My designs incorporate 18K gold plate and semiprecious gemstones or pearls. “Specifically designed for the glamorous” – Harrison Morgan

Irina Pantaeva is a Russian-American model and actress. In 1992, she moved to Paris to pursue her modeling career. She succeeded in getting an appointment with Karl Lagerfeld, that allowed her to join in his fashion show and the world of haute couture. Pantaeva has walked runways for renowned designers and fashion houses, such as: Christian Dior,Versace, Alexander McQueen, Thierry Mugler, John Galliano,Yves Saint Laurent, Chloé. Irina was presented on covers of the fashion magazines: Vogue, Harper’s Bazaar, Elle, etc. She was a Sports Illustrated swimsuit model and wrote her autobiography Siberian Dream: A Memoir, which was published by Avon/Bard. As an actress, Irina starred in the films Mortal Combat and Zoolander, and also on Braodway in Jewtopia, as well as on TV in the hit series Third Rock From The Sun. These iconic characters made Irina a modern day cult figure in Pop culture. Irina is an internationally recognized spokesperson for environmental causes that are true to her heart, such as cleansing the world’s sources of clean drinking water. Nowadays, Irina Pantaeva wears with great pride: dresses, boleros, and jewelry designed by Harrison Morgan.

Inspired by classical architecture, past and present fashion trends, Guy can find perfect beauty almost anywhere he looks. After having worked successfully in the jewelry industry for notable houses such as Cartier and DeBeers, Guy started his own Interior Design firm in 1999. Instant success came with notable clients from Wall Street, the British Royal Family, Hollywood Personalities, and New York Society. With over fifteen years of high end design experience, Guy is an accomplished and internationally acclaimed Interior Designer. He often appears on NBC in the U.S. and is also a celebrated Scandinavian TV personality with a TV series, commercials, and Home Product lines. Guy Clark –is a proud and prominent resident of Palm Beach and NYC. (His office at 350 South County Road is by appointment). www.decoratorguy.com