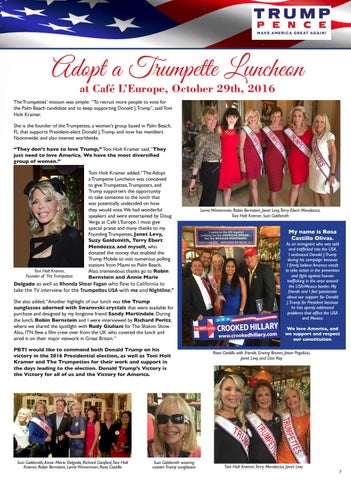 The Trumpettes’ mission was simple: “To recruit more people to vote for the Palm Beach candidate and to keep supporting Donald J. Trump”, said Toni Holt Kramer. She is the founder of the Trumpettes, a women’s group based in Palm Beach, FL that supports President-elect Donald J. Trump. and now has members Nationwide, and also interest worldwide. “They don’t have to love Trump,” Toni Holt Kramer said, “They just need to love America. We have the most diversified group of women.”

Toni Holt Kramer added, “The Adopt a Trumpette Luncheon was conceived to give Trumpettes, Trumpsters, and Trump supporters the opportunity to take someone to the lunch that was potentially undecided on how they would vote. We had wonderful speakers and were entertained by Doug Verga at Café L’Europe. I must give special praise and many thanks to my Founding Trumpettes, Janet Levy, Suzy Goldsmith, Terry Ebert Mendozza, and myself, who donated the money that enabled the Trump Mobile to visit numerous polling stations from Miami to Palm Beach. Also, tremendous thanks go to Robin Bernstein and Annie Marie

take the TV interview for the Trumpettes USA with me and Nightline.” She also added, “Another highlight of our lunch was the Trump sunglasses adorned with Swarovski crystals that were available for purchase and designed by my longtime friend Sandy Martindale. During the lunch, Robin Bernstein and I were interviewed by Richard Peritz, where we shared the spotlight with Rudy Giuliani for The Shalom Show. Also, ITN ﬂew a film crew over from the UK who covered the lunch and aired it on their major network in Great Britain. “ PBTI would like to commend both Donald Trump on his victory in the 2016 Presidential election, as well as Toni Holt Kramer and The Trumpettes for their work and support in the days leading to the election. Donald Trump’s Victory is the Victory for all of us and the Victory for America.

My name is Rosa Castillo Olivas.

As an immigrant who was sold and trafficked into the USA, I embraced Donald J.Trump during his campaign because I firmly believe America needs to take action in the prevention and fight against human trafficking in the area around the USA/Mexico border. My friends and I feel passionate about our support for Donald J.Trump for President because he has openly addressed problems that affect the USA and Mexico. We love America, and we support and respect our constitution. Rosa Castillo with friends, Erwing Bruner, Jason Pegolizzi, Janet Levy, and Dan Ray