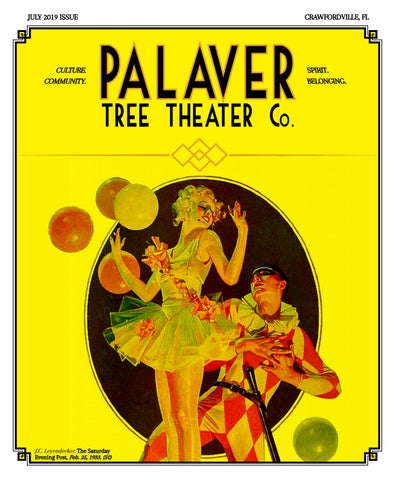 “What Is Permission, and Who Do We Need It From?”

n May, after a brief respite from our first full (and successful) season, we took some time to ponder the season ahead, and to ask some bigger questions. Namely, what do we want our role in the community to be in the years to come? As that was happening, two random moments occurred that both lit a bulb and finally smacked a “mosquito” that had been pestering my brain since I returned to Wakulla from New York City several years ago. In the first moment, the question was asked, in regard to what we communicate and how, whether we were about the business, or about the soulful health of our community. The latter can lend itself to some risk, if we want to do more than stage the 9,437th production of “You’re a Good Man, Charlie Brown.” No disrespect intended, but we are called towards impact as well as entertainment. And what if people don’t want to talk about some things we would like to discuss? Woe, perhaps, to those who challenge the prevailing norms of etiquette, faith, history, and politics. In the second moment, a friend of mine and I were leaving a local convenience store. And when I held the door for him, he tried to hold it for me instead. He gestured. I refused. I gestured. He refused. After several rounds of this, and shared befuddlement, we broke out in laughter, and -- noticing that others were noticing -- silently agreed to exit at the same time. But something chilly ran through me: Why were we, as older men, not allowed the freedom to become silly sevenyear-olds in the purest of moments, even when it made no sense to others? Now, it cannot be ignored in this story that my friend is a white northerner, and I am neither. I realized later that something in that moment was loaded. Was he, a northerner, assuming that I only hold the

door for white people? Was I assuming that as a northerner he found all courtesy suspect? For two people in a truly kind friendship, we seemed to constantly be asking each other for permission to be kind. And it all clicked together. The common issue between those two moments -- and what had been bothering me for years, unnamed -- was “permission.” And the question presented itself: “What is permission, and who do we need it from?” Who is it that we ask for permission to dance at a party, or to dress the way we want? When are permissions good, and when are they abused? How is permission different from approval? And I realized that in some subconscious way over the past years, I was asking for permission to create community dialogues that some might prefer left quiet. I had inhabited a sterile, safe place where I would not risk upsetting that one, rare person who might take umbrage (or more) at the sight of a white man holding the door for me -- a black man. Permission seemed too large a topic to cover with one production or community event, and important enough that it could be employed as a theme for an entire season -- not just in our productions, but in all we do. From the events we plan, to the tone of these words, to the cover of this newsletter. What if we all decided to pursue one topic –- permission -- together, for a whole year, and how might the question make us more whole for the asking? That, good neighbor, is the season ahead. And we are now asking you, the community, for permission to do so. Your support (or lack of it) will tell us your answer. We hope you will come play with us. Because life is too short to be concerned with which one of us is holding the door. And we are excited to reveal what lies ahead!

This 5-week workshop is designed for beginning actors as well as those looking to dig a bit deeper. A great introduction on approach and foundation of the acting craft, with a seasoned performer. 850-661-4574

This 5-class workshop allows students to study and practice essential tools of directing for the stage, led by a 30+ year veteran of theater. GaryBrame3@gmail.com

Learn how to fully awaken your body, become aware of your thoughts, and surrender to stillness through the practice of meditation. (6:15pm sharp. No admittance after 6:20.)

MIRRORS NEEDED!!! -- For the staging of

Shop at a local business.

Figure out what you’re taking to the barbecue.

Bank error in Check tire your favor. pressure in Collect $200. car. What the heck, vacuum it while you are there.

This Will Sell Out!

* Series class. Register in advance at PalaverTreeTheater.org. See listing inside.

Support those who support your community!