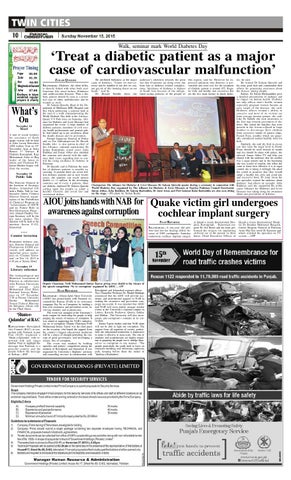 Public Talk The Director General of the Institute of Strategic Studies, Islamabad will hold a Public Talk by Ambassador Ahmet Uzumcu Director General, organization of the Prohibition of Chemical Weapons on “Achievements of OPCW and its Future Role in Post-Destruction Phase”. Aziz Ahmad Chudhry Foreign Secretary will be the key notes speaker. The function will be held at the institute Sector F-5/2, Islamabad.

‘Treat a diabetic patient as a major case of cardiovascular malfunction’ ZUBAIR QURESHI ISLAMABAD—Diabetes, the silent killer, is directly linked with other body malfunctions like renal failure, blindness and cardiovascular diseases. Thus a diabetic patient should be seen as a potential case of other malfunctions and be treated as such. Dr Saleem Qureshi, Head of the Department of Medicines KRL Hospital said this while addressing a seminar held at the end of a walk commemorating the World Diabetes Day held at the Aiwan-eQuaid, F-9 Pakr here on Saturday. Alliance for Diabetes and Liver Diseases had organized the event. A large number of diabetic patients, members of civil society, health professionals and general public had turned up to get awareness about the deadly disease and its prevention. Former Inspector General of Police and ex-Tax Ombudsperson Dr Shoaib Suddle who is also patron-in-chief of the Alliance, eminent nutritionist Dr Salma Badruddin, noted artist Zeba Bakhtiar and Imran Abbas also attended the seminar and shared with the audience their views regarding how to control the rising incidence of diabetes in Pakistan. Dr Qureshi said in Pakistan the number of diabetes patients is steadily increasing. At present there are seven million diabetes patients and in next twenty years, the number can reach almost double i.e. 13 million. In the developing countries out of every 4 patients, three are diabetic, deplored Dr Saleem Qureshi calling upon the people to adopt a healthy lifestyle and avoid fats and sweetened dishes.

He attributed bulkiness as the major cause of diabetics. “Unless we start exercise and be mindful of our diet we cannot get rid of this looming threat on our heads,” said he. Dr Shoaib Suddle drew the

audience’s attention towards the grim fact that 10 persons are dying every one hour due to diabetes related complications. Incidence of diabetes is highest in South Asia because of the unregulated eating patterns of the people of

tes, he said. He wished Dr Saleem Qureshi and his team good luck and commended their efforts for generating awareness about the disease among people. Earlier, Dr Salma Burhanuddin gave a detailed presentation of diabetes and its impact on human health. Diabetes not only affects men’s health, women especially pregnant women become an easy target of the disease, she said. Diabetes affects women’s ability to conceive and most of its victims are from average income groups, she said. Like Dr Suddle she said awareness is the first step towards prevention of diabetes. She asked the families that were present in the Aiwan-e-Quaid in large number to discourage their children from excessive intake of potato chips, French Fries, noodles which are generally considered normal healthy food for kids. Similarly, she said dry fruit in excess can also raise the sugar level in blood. Flour should be used instead of maida and rice should be taken with pulses, she advised. Imran Abbas TV and film star shared with the audience that his mother was a sugar patient and in the beginning she was scared of insulin, but when she came to know how effective it is in sugar control, she is taking it willingly. He asked the youth to promise that they would adopt a healthy life style and avoid late and excessive food. Dr Amir Awan the eye specialist warned the audience about diabetes’ bad effects on eyesight. Zeba Chairperson The Alliance for Diabetes &amp; Liver Diseases Dr Saleem Qureshi speaks during a ceremony in connection with Bakhtiar said she supported the noble World Diabetes Day organized by The Alliance for Diabetes &amp; Liver Diseases at Nazriya Pakistan Council Secretariat. cause Alliance for Diabetes and Liver Imran Abbas, Zeba Bakhtiar, Dr Saleem Badruddin, Dr Amir Awan and Prof Saleemi Halai Badruddin are also seen sitting Diseases was taking along for awareness on the stage.—PO photo by Sultan Bashir about and prevention of diabetes.

‘Sham-eQalandar’ at RAC R AWALPINDI —Rawalpindi Arts Council (RAC) in connection with National Action Plan (NAP) organized a ‘Sham-e-Qalandar’ with renowned folk sufi singer Qurban Niazi to highlight the message that Pakistan is a peaceful country and the people follow the message of Sufism.—INP

this region, said he. However he expressed optimism that diabetes is preventable and total cost for the treatment of diabetic patient is around $55. Regular walk and healthy (not excessive) diet are the two main factors to check diabe-

Deputy Chairman, NAB Muhammad Imtiaz Tajwar giving away shield to the winner of the speech competition ‘No to corruption’ organized by AIOU.—APP Rawalpindi and Islamabad regional offices. STAFF REPORTER Vice Chancellor Professor Dr. Shahid Sididiqui ISLAMABAD—Allama Iqbal Open University announced that the AIOU will provide aca(AIOU) has joined hands with National Ac- demic and institutional support to NAB in countability Bureau (NAB) in its awareness making the awareness and prevention camcampaign, Say No to Corruption, by holding a paign successful. It was decided that AIOU first-ever awareness and prevention event, in- and NAB will soon jointly arrange similar events at the University’s regional campus in volving students and academicians. The event was arranged at the University’s Lahore, Karachi, Peshawar, Quetta, Sukkar main campus for motivating the people to help and Multan. The University will also incorpurging the society of menace of corruption. It porate anti-corruption’s contents in its curwas aimed at supporting the NAB’s initiative, riculum. Imtiaz Tajwar further said that NAB alone say no to corruption. Deputy Chairman NAB Muhammad Imtiaz Tajwar was the chief guest will not be able to fight out corruption. The on the occasion, who hoped the support from support from all segments of society, particuthe country’s biggest educational institution larly the educational institutions is imperative will be a source of strength promoting the con- to make it effective at mass-scale. The role of cept of good governance, and developing a students and academicians are highly important in preparing the people not to indulge themsociety, free of corruption. The event was marked by holding selves in corruption in any manner. “The speeches and posters’ competition among the people particularly the youth need to focus on students of Rawalpindi and Islamabad. It was character-building and following righteous organized by University’s Students’ advisory path, keeping before them the model of and counseling services in collaboration with ‘khulfaa-e-Rashideen’.

at Quaid-e-Azam International Hospital, Rawalpindi. Renowned surgeon Dr Atif Ikram and his team performed the surgery for implanting artificial ear to the patient in three hours. Chief Executive Officer of 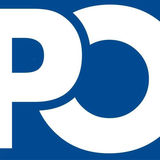