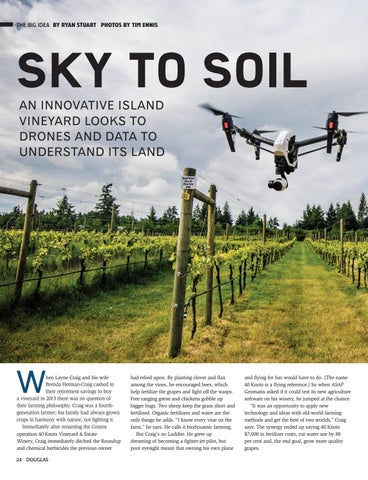 the big idea BY ryan stuart Photos by Tim Ennis

hen Layne Craig and his wife Brenda Hetman-Craig cashed in their retirement savings to buy a vineyard in 2013 there was no question of their farming philosophy. Craig was a fourthgeneration farmer; his family had always grown crops in harmony with nature, not fighting it. Immediately after renaming the Comox operation 40 Knots Vineyard &amp; Estate Winery, Craig immediately ditched the Roundup and chemical herbicides the previous owner

had relied upon. By planting clover and flax among the vines, he encouraged bees, which help fertilize the grapes and fight off the wasps. Free ranging geese and chickens gobble up bigger bugs. Two sheep keep the grass short and fertilized. Organic fertilizers and water are the only things he adds. “I know every vine on the farm,” he says. He calls it biodynamic farming. But Craig’s no Luddite. He grew up dreaming of becoming a fighter-jet pilot, but poor eyesight meant that owning his own plane

and flying for fun would have to do. (The name 40 Knots is a flying reference.) So when ASAP Geomatix asked if it could test its new agriculture software on his winery, he jumped at the chance. “It was an opportunity to apply new technology and ideas with old-world farming methods and get the best of two worlds,” Craig says. The synergy ended up saving 40 Knots $7,000 in fertilizer costs, cut water use by 88 per cent and, the end goal, grow more quality grapes. 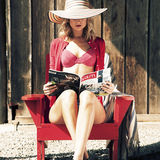