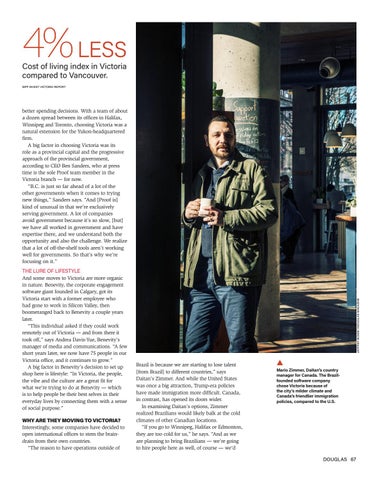 THE LURE OF LIFESTYLE And some moves to Victoria are more organic in nature. Benevity, the corporate engagement software giant founded in Calgary, got its Victoria start with a former employee who had gone to work in Silicon Valley, then boomeranged back to Benevity a couple years later. “This individual asked if they could work remotely out of Victoria — and from there it took off,” says Andrea Davis-Yue, Benevity’s manager of media and communications. “A few short years later, we now have 75 people in our Victoria office, and it continues to grow.” A big factor in Benevity’s decision to set up shop here is lifestyle: “In Victoria, the people, the vibe and the culture are a great fit for what we’re trying to do at Benevity — which is to help people be their best selves in their everyday lives by connecting them with a sense of social purpose.” WHY ARE THEY MOVING TO VICTORIA? Interestingly, some companies have decided to open international offices to stem the braindrain from their own countries. “The reason to have operations outside of

better spending decisions. With a team of about a dozen spread between its offices in Halifax, Winnipeg and Toronto, choosing Victoria was a natural extension for the Yukon-headquartered firm. A big factor in choosing Victoria was its role as a provincial capital and the progressive approach of the provincial government, according to CEO Ben Sanders, who at press time is the sole Proof team member in the Victoria branch — for now. “B.C. is just so far ahead of a lot of the other governments when it comes to trying new things,” Sanders says. “And [Proof is] kind of unusual in that we’re exclusively serving government. A lot of companies avoid government because it’s so slow, [but] we have all worked in government and have expertise there, and we understand both the opportunity and also the challenge. We realize that a lot of off-the-shelf tools aren’t working well for governments. So that’s why we’re focusing on it.”

Brazil is because we are starting to lose talent [from Brazil] to different countries,” says Daitan’s Zimmer. And while the United States was once a big attraction, Trump-era policies have made immigration more difficult. Canada, in contrast, has opened its doors wider. In examining Daitan’s options, Zimmer realized Brazilians would likely balk at the cold climates of other Canadian locations. “If you go to Winnipeg, Halifax or Edmonton, they are too cold for us,” he says. “And as we are planning to bring Brazilians — we’re going to hire people here as well, of course — we’d

The Douglas April/May 2020 issue is the annual 10 to Watch issue, showcasing the up-and-coming businesses that are changing the way we think...

The Douglas April/May 2020 issue is the annual 10 to Watch issue, showcasing the up-and-coming businesses that are changing the way we think...