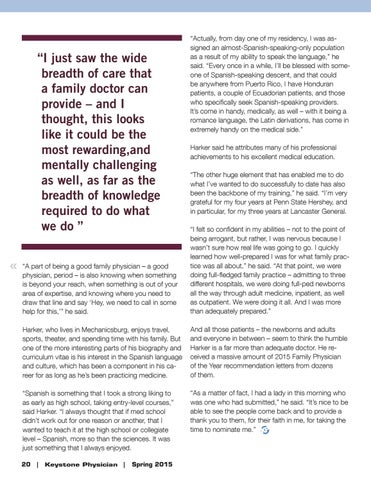 “I just saw the wide breadth of care that a family doctor can provide – and I thought, this looks like it could be the most rewarding,and mentally challenging as well, as far as the breadth of knowledge required to do what we do ”

“Actually, from day one of my residency, I was assigned an almost-Spanish-speaking-only population as a result of my ability to speak the language,” he said. “Every once in a while, I’ll be blessed with someone of Spanish-speaking descent, and that could be anywhere from Puerto Rico, I have Honduran patients, a couple of Ecuadorian patients, and those who specifically seek Spanish-speaking providers. It’s come in handy, medically, as well – with it being a romance language, the Latin derivations, has come in extremely handy on the medical side.” Harker said he attributes many of his professional achievements to his excellent medical education. “The other huge element that has enabled me to do what I’ve wanted to do successfully to date has also been the backbone of my training,” he said. “I’m very grateful for my four years at Penn State Hershey, and in particular, for my three years at Lancaster General.

“I felt so confident in my abilities – not to the point of being arrogant, but rather, I was nervous because I wasn’t sure how real life was going to go. I quickly learned how well-prepared I was for what family practice was all about,” he said. “At that point, we were doing full-fledged family practice – admitting to three different hospitals, we were doing full-ped newborns all the way through adult medicine, inpatient, as well as outpatient. We were doing it all. And I was more than adequately prepared.”

Harker, who lives in Mechanicsburg, enjoys travel, sports, theater, and spending time with his family. But one of the more interesting parts of his biography and curriculum vitae is his interest in the Spanish language and culture, which has been a component in his career for as long as he’s been practicing medicine.

And all those patients – the newborns and adults and everyone in between – seem to think the humble Harker is a far more than adequate doctor. He received a massive amount of 2015 Family Physician of the Year recommendation letters from dozens of them.

“Spanish is something that I took a strong liking to as early as high school, taking entry-level courses,” said Harker. “I always thought that if med school didn’t work out for one reason or another, that I wanted to teach it at the high school or collegiate level – Spanish, more so than the sciences. It was just something that I always enjoyed.

“As a matter of fact, I had a lady in this morning who was one who had submitted,” he said. “It’s nice to be able to see the people come back and to provide a thank you to them, for their faith in me, for taking the time to nominate me.”